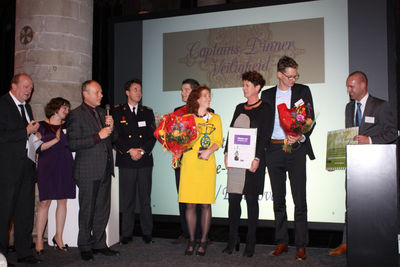 Eindhoven’s multidisciplinary De-escalate project won the Don Berghuijs Award 2014, the most important national safety prize, last night. De-escalate is a collaboration between the TU/e Intelligent Lighting Institute (ILI), the City of Eindhoven, Philips and other partners. The project focuses on testing how lighting scenarios can be used to reduce aggressive situations.

The Don Berghuijs Award is presented each year for the most innovative multidisciplinary project that contributes to increased safety in the community. The prize has gained a strong reputation in the world of public order and safety. An expert jury of managers and policy-makers from the safety chain, science and industry selected De-escalate last night as the winner out of three nominated projects at an event in Leiden, in the presence of representatives from the entire safety chain.

Yvonne de Kort, researcher at ILI and project leader of De-escalate, received the prize from jury chairman Ben Ale, emeritus professor of Safety Science and Disaster Abatement at Delft University of Technology. De Kort is delighted to receive this prize: “It’s a great recognition for this special collaboration project, in which industry, the municipality and entrepreneurs have joined forces in Eindhoven in an innovative way to address the problems of nuisance and aggression.”

The De-escalate project develops lighting scenarios that contribute to de-escalating and managing potentially aggressive situations. By varying color, intensity and dynamics, interactive lighting can positively affect people’s social perception and behavior. It can influence attention, create atmosphere, provide social cues and contribute to self-regulation and awareness. These are first tested in the lab, as well as in the ‘living lab’ in the Stratumseind, Eindhoven.

The project has a broadly-based consortium of actively involved partners from a wide range of domains. Formally involved in the project are: Eindhoven University of Technology (TU/e), the Municipality of Eindhoven, Polyground (and through them local catering businesses), the Dutch Institute for Safety and Security (linked to Regionale Toezichtsruimte), Philips, The Lux Lab and GGzE. The local police authority in the South-East Brabant area also takes part in project discussions.