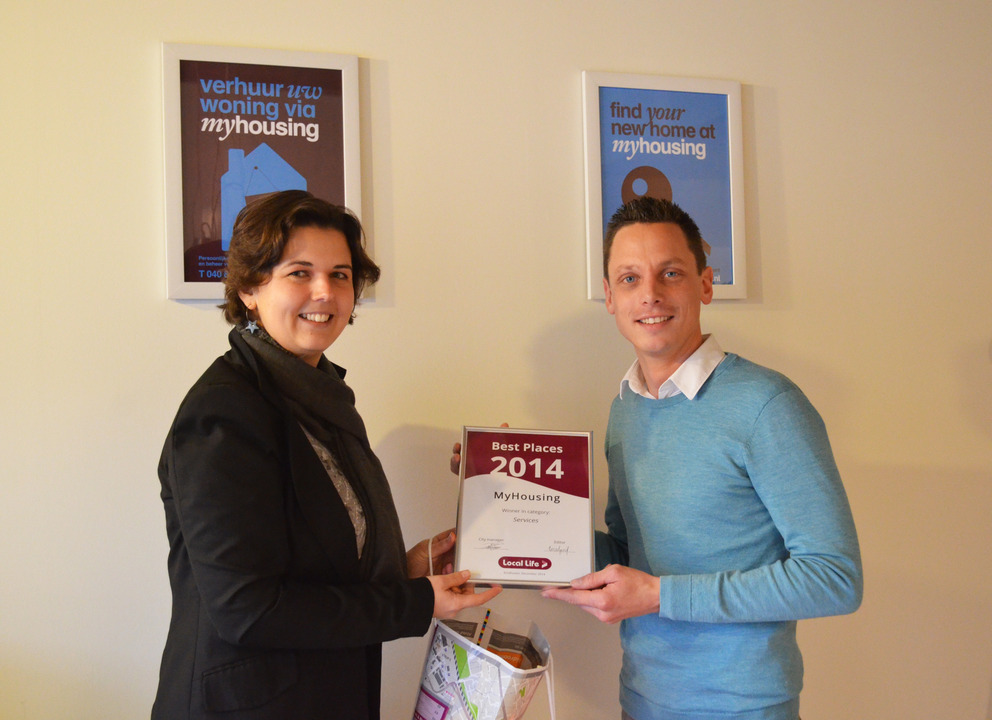 Last week several Best Places 2014 awards were handed out to the winners of the contest held by Local Life Eindhoven.

People living in Eindhoven and using the facilities, services or products ranked the places by giving them stars, commenting on the experienced service and times of visits on the website.
This led to 24 places in Eindhoven receiving an award from Local Life Eindhoven, the website where all these places are mentioned.

Some of the awards are already handed out. Like to Parktheater, Holiday Inn, The Burger, Eindhoven Library, Out of The Blue Concept Store and Ketelhuis for example. Many more will accept their prize hopefully just in time before Christmas.

As Ilse van der Palen from Local Life Eindhoven mentions: "We like to hand them out in advance of Christmas. We thought this would be a nice token of appreciation for them before starting their Christmas celebrations. This is the first time we do this but we surely will do a contest like this next year."

With this reward Local Life Eindhoven hopes to encourage excellence in places, services and ideas. Newcomers and guests to the city can also benefit from this ranking by the local crowd (national and international).

Amongst others, yesterday, the reward was handed out to ‘Van Moll’ brew pub at Keizersgracht. Jaap Hermans and Erwin van Moll started the enterprise October last year. Both having experienced night life in Eindhoven for a long time as a bar tender and music producer, they had a clear idea of how their new place should look like: modern, light, industrial and welcoming. "We wanted a homely atmosphere. A place where friends would meet, talk, share special moments and have a good time, while really tasting a good, local beer," says Jaap Hermans. "Our place is also not a fixed concept, we want to be open for changes and development, like is happening a lot in Eindhoven."
Erwin van Moll, who brought in the brewing experience comments: "Receiving the award tells us we are on the right track: a good story, a good idea, passion, a local beer made with craftsmanship, this is our message."

The openness is apparent in the building as the brewing process can be seen through a glass window while you are sipping your beer. But don’t expect shiny copper tanks and glass pipes as the production takes place in white plastic tanks, simple… Practical, as the pub itself.

Another prize winner is ‘My Housing’ property management company, led and owned by Daan Kuil. He received the Best Places 2014 award in the ‘Services’ category. He is happy with the award: "This proves there was indeed a need for change in the sector. I started 2 and a half years ago and I wanted to do it different from the experience I had in the housing business. I found the trade quite rude and it was focussed on plain money grubbing. I think personal attention is important and my service doesn’t stop when my clients have found a studio or apartment. I try to be helpful in giving advice on for example finding a sports centre, a good restaurant or in giving tips on finding a job. Two thirds of my clients are international, so extended information is valuable I think. It is good to know it is appreciated and the formula is working," he comments delightedly.

On the website of Local Life Eindhoven you can find the complete listing of all the awarded 24 places in the 7 categories in Eindhoven. And you can now already start voting for the next round.