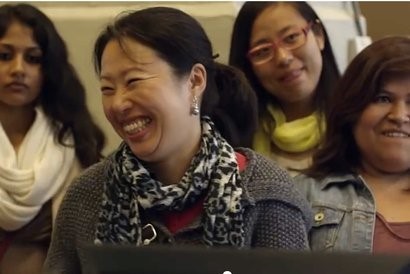 Eindhoven University of Technology (TU/e) and Indigo-World’s Get in Touch programme for partners of international staff who have also moved to the Netherlands have won the Expatriate and Mobility management Award (EMMA) in London. The Get in Touch Programme won in the category Best Family Support Programme.

The TU/e and Indigo-World programme is called Get in Touch with People and Places in Eindhoven, and its objective is to help partners of international staff to build a new social network here and get to know the city. Participants visit cultural institutions, the city library and learn about Eindhoven events and celebrations like GLOW, Halloween, Sinterklaas (also called Sint Nicolaas), and Carnival. Partners can share their experiences through an online blog and a Facebook group. All set up with many international volunteers headed by frontrunner Carola Eijsenring from Indigo-World.

The programme was developed in 2001 by the company Indigo-Wereld, in close collaboration with TU/e. Nicole van der Wolk, director of Personnel and Organization, said "It’s a prestigious award in the field. It’s a wonderful compliment for the unique programme we’ve set up with Indigo-Wereld.
Partners who’ve travelled along often have a difficult time finding their way in society here and this initiative caters to that. Some scientists have even told us Get in Touch was the deciding factor in their choice for TU/e." Van de Wolk added "They’re talking to the city to discuss how the programme may be expanded to cover the whole region."

There’s no prize money – the ‘honour and credit’ are the prize. Indigo-Wereld and TU/e have produced a film about the Get in Touch Program, about what partners experience after migration and the positive effects of participating in Get in Touch.

Source: www.tue.nl
Photo: A still from the Get in Touch programme