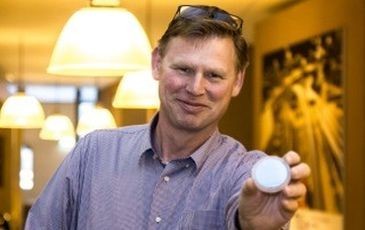 It’s no accident that 2015 has been declared International Year of Light by the United Nations. On 25 November the High Tech Campus (HTC) is holding the next of its popular Campus Technology Seminars (CTS), designed to give participants a comprehensive briefing from practitioners working at the “cutting edge”.

Richard Visser (speaker at the next CTS) is CEO of Smart Photonics, a young, dynamic company founded in 2012 is based at TU/e Campus, as well as at the HTC and he believes we’ve reached a new tipping point with photonics.

"Light can do so much more than just illuminate things," said an enthusiastic Richard Visser. "We’ve really reached a tipping point with photonics. We’ve developed ways to manipulate light to perform functions that traditionally fell within the domain of electronics. Yet, we’re only just beginning to realise the possibilities, turn them into working prototypes and build completely new businesses."

"Everything is in place in this region of the Netherlands to take Photonics to the next level. We differ from colleagues in the Silicon industry in that we use a different material for our chips: indium phosphide. Within this material you can create light, and that’s not possible with silicon. Eindhoven has pioneering academic knowhow at the TU/e, clever industrial designers, chip makers like ourselves, plus the technical companies who can integrate photonics into a wide range of other processes."

"On 25 November I hope more people will be able to discover just how important this field is becoming to their own future. The seminar is free and starts at 9.30 in lecture theatre HTC 34. I hope to see many curious people there."