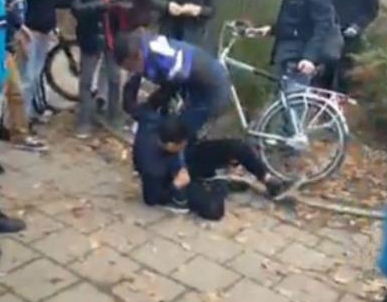 A short film of a fight which took place right in front of the Eckartcollege in Eindhoven has gone viral on GeenStijl and Dumpert. The school has already taken action and has suspended the ‘offender’, according to Omroep Brabant.

The school board have also contacted the police. They are now investigating the matter. The suspended boy is a VMBO (voorbereidend middelbaar beroepsonderwijs; literally, "preparatory middle-level applied education") junior at the Eckart. He is fourteen or fifteen years old.

The film clearly shows two boys arguing. After a while, one of the boys punched the other boy quite fiercely in the head, while many fellow students just looked on. While the ‘victim’ lay on the ground, the offender kicked him again. Only then did the bystanders react.

The school is shocked by the film. ‘This is very serious and not just a small fight’, said Rector, Jean Wiertz. The victim is not even a student at the school. The Eckart College now intends to use the film in future, to teach all students that they should take immediate action in such events.