Home NEWS Koningsdag in Tilburg not like 4th of July 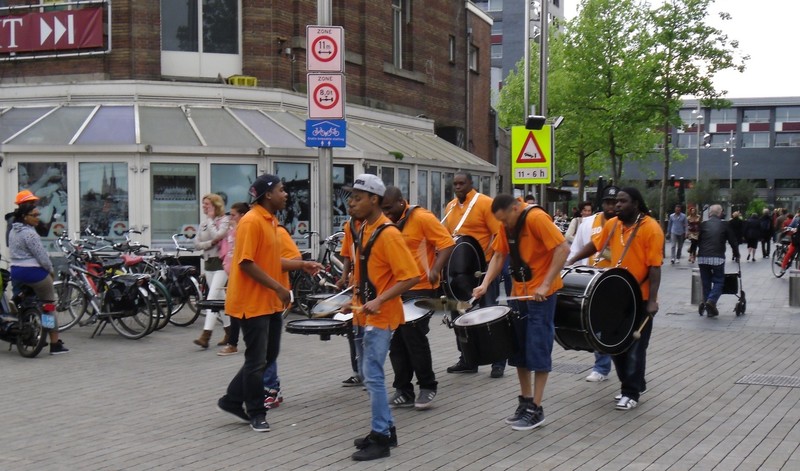 As an American living in the Netherlands I have to admit that Dutch holidays can be a bit confusing. There are so many similarities, here children are visited by Sinterklaas while in America they are visited by Santa Claus, in the United States we celebrate a holiday called Easter while here you celebrate Pasen but both involve lots of chocolate rabbits and eggs. In parts of the US Mardi Gras is one of the biggest celebrations of the year while in parts of the Netherlands Carnival is the biggest party. So many similarities and yet so many differences. One of the big differences becomes obvious when you begin to look at holidays that don’t have a religious basis but that are instead centered around historical events or feelings of nationalism.

America is a very nationalistic nation. Almost anywhere you go in America you will see the US flag being flown over homes, schools, churches, and businesses. This isn’t just for holidays, no these flags stay out year round and are joined by even more flags and other symbols of patriotism on holidays such as Independence Day (the 4th of July), Memorial Day, Veterans Day, Flag Day, and Presidents Day. Being so accustomed to holidays celebrating the country I am from and its people I couldn’t wait to experience a Dutch holiday that didn’t have a religious origin but that seemed, to me at least, to be a celebration of Dutch pride and history. Add to this that I wouldn’t be celebrating my first Koningsdag alone, this would be the first Koningsdag for everyone in the Netherlands. I was truly, quite excited.

I had done my research, I assumed that Koningsdag would be very similar to Koninginnedag and so I read everything I could about Queen’s Day. One problem I encountered, and have encountered in the past when trying to learn more about Dutch culture, is that my skills in the Dutch language are quite limited. I am learning but it is a slow process and so I still have to search out information in English. When it comes to information about the Netherlands in English approximately 95% seems to be about Amsterdam. Before we came to the Netherlands we tried to learn as much about this country as we could but it only took a day or so to realize that much of what we had learned before we arrived, while completely applicable to Amsterdam, simply wasn’t true when it came to Tilburg or Brabant. This disconnect was the same for information about King’s/Queen’s Day.

I saw photo after photo of Amsterdam, each one made the city look like it had been painted orange. I saw orange shirts, orange wigs, orange pants, orange boats, everything was orange except for the multitude of Dutch flags piercing the ocean of orange. This looked to me like a strange but familiar version of America. A multitude of people who might not have a lot in common joined together in a joyful moment because of the one thing they do share, their nationality. America is normally so divided, so polarized, that these occasional days where we concentrate on what we have in common are very important to us and I couldn’t wait to be part of something similar here in Tilburg.

Friday came and while standing on our balcony we could hear music being played all over Tilburg’s center. We weren’t able to take part in these celebrations but I assumed that if King’s Night was this big of a party that King’s Day would be quite the spectacle. When we awoke Saturday morning and stood on our balcony the cheers and music from the night before had been replaced by an almost eerie silence. The roads were almost empty. Cyclists were almost nonexistent. No one was out walking their dogs. Our apartment is near Koningsplein which is normally bustling and filled with people on Saturday shopping at the market, but there was no market and no people. Tilburg almost seemed like it had been deserted. As the day wore on this began to change, it seemed that the celebrations the night before had caused many in the city to stay in bed much longer than they normally would, but slowly the streets began to look like the streets of a city instead of a ghost town. We wandered out and began to search for the celebrations. We found an area that was hosting musical performers from around the world and where the streets were filled with merchants and everyday people taking advantage of the free market. We then made our way to an area in the center filled with bars and cafes and found that they had a stage set up and a DJ providing music to the crowd. This crowd was thoroughly clad in orange and I did see a few Dutch flags around town but overall it felt like a very small scale version of Carnival. Not as long, not as large, and not as drunken.

As we made our way back to our apartment I was feeling a bit disappointed, I didn’t feel like I had gotten a taste of Dutch patriotism as I thought I would. It was nice, I had enjoyed myself, but I wasn’t able to draw that connection between my American self and my new home that I thought I would. Then as I sat in our livingroom checking my email after dinner I saw a bright light and heard an explosion. I looked out the window and saw fireworks exploding over De Piushaven and suddenly it all made sense. America is a loud, boisterous place where complete strangers hug each other and where bigger and louder and bolder is always better. Here in the Netherlands people tend to be more reserved but also more thoughtful, more willing to consider all sides, and more willing to have a conversation instead of a shouting match. Maybe I am seeing this in the wrong way but it seems like there is less of a need for grand shows of patriotism and temporary unity in the Netherlands because being Dutch has a deeper and more consistent meaning than being American. Maybe the type of holiday I was looking for isn’t needed here and a day off and a bit of fun with your friends is more than adequate. Even if I am completely wrong in the way I am interpreting things I had an enjoyable day and was able to watch the fireworks light up the sky. I don’t know of any American who isn’t in a good mood after watching fireworks.