Home NEWS The Other Woman 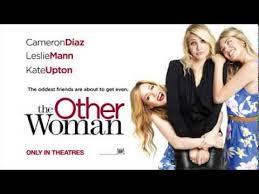 It’s simple: If you loved The First Wives Club with Bette Midler, Diana Keaton and Goldie Hawn you will love this movie. It’s all about revenge.

And that makes people crazy sometimes. I know of a girl who sewed shrimps in the rim of the cheater’s curtains, put some the under the floor, closets and every hole in his car.
After about a week it started smelling so bad he was ready to sell the house and the car.

About the movie:
After discovering her boyfriend is married, a woman (Cameron Diaz) tries to get her ruined life back on track. But when she accidentally meets the wife he’s been cheating with (Leslie Mann), she realizes they have much in common, and her sworn enemy becomes her greatest friend. When yet another affair is discovered (Kate Upton), all three women team up to plot mutual revenge on their cheating, lying, three-timing SOB. That’s basically the whole story.

Nick Cassavetes (son of famous John) is the director who also made a remarkable movie as The Notebook. A gentle and evocative adaptation of Nicholas Sparks’ bestselling novel follows an elderly man (James Garner) who reads a heartbreaking period love story aloud to a female nursing home resident (Gena Rowland Nick’s mother in real life). The film then plays out the story-within-the-story, about a couple who share the greatest summer of their lives with one another, and are then irrevocably separated by their parents and the rise of World War II.

The Other Woman is a chick-flick, a great movie to see with your daughter, friends at a Ladies Night.

Try the beautiful theatre Zien at Keizersgracht, order a cosmopolitan and enjoy! You will feel like Carrie and her friends in Sex and The city!