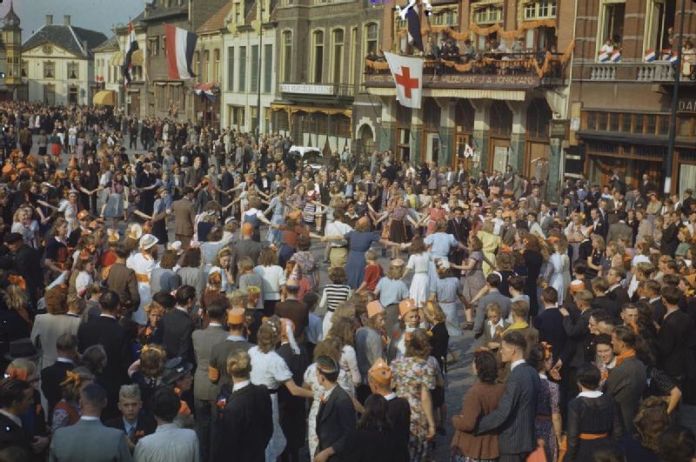 On 18 September, Eindhoven celebrated that 69 years ago, the Allied Forces came to liberate the city from the Germans. The 101st Airborne Division ended World War II for the citizens of Eindhoven. An era of carefree living was knocking at the door. Or was it?

As part of operation Market Garden, almost 6,700 American paratroopers had already landed in the areas around Eindhoven on Sunday 17 September, 1944. At the same time, on the South side of Eindhoven, British ground troops, along with the Irish Guards, were being successful at fending off the Germans in Valkenswaard. A day later, these allied troops met each other near the centre in Woensel. Eindhoven was officially liberated.

Carefully, citizens of Eindhoven took out their well-hidden Dutch flags, orange hats and other party favours and started celebrating in the streets. Most people hung around their own houses, still a bit afraid to move around freely in their own city. But the town’s centre, with the market square and the Stratumseind, were also packed with people singing and dancing. When the first allied tanks arrived at the Stratumseind, the party came to a height. Here they were, the tough soldiers who had been fighting so hard since their landing in Normandy on D-Day and they were handing out chocolate, chewing gum and kisses. People were ecstatic and that night, everyone went to bed with a smile on their face.

The party pretty much continued the next morning, on 19 September. People could still not believe their eyes as they saw all those friendly soldiers moving into their city. It was all party and joy. Until about eight o’clock in the evening. All of a sudden, they could hear the low humming sound of airplanes close by, followed by the horrendous whistling of falling bombs. Eindhoven was under attack. Again.

Panic struck immediately and people tried to hide in bomb shelters, but it all went so fast. Too fast to realize what was actually going on. The Germans had decided to try and stop the allied troops to get any further than Eindhoven. Forty minutes later, the centre of Eindhoven was completely destroyed.

The first wave of attack was aimed at the Philips factories, the second at the city centre. In the Hertogstraat, a number of ammunition trucks were hit and a few tankers caught fire as well. The area that was hit the hardest was around Catharina church and the Stratumseind-Hertogstraat crossing.

Bombs also fell in other parts of the city: 369 houses were destroyed, as well as 179 shops and cafés, 11 factories, 7 churches, 12 public buildings and 6 special constructions, like bridges.

Over 200 people were killed and about 800 wounded. At the Biesterweg alone, a packed bomb shelter received a direct hit, leaving 41 people dead at once.

The city that had been celebrating its freedom for almost two days, was now smelling of death and destruction. Horse-driven carts with piles of coffins were seen in the streets, instead of celebrating happy people. The feeling of being free though never went away. The sacrifice was enormous, but people remained incredibly grateful for their liberation and started rebuilding the city the very next day.