On a cold Saturday morning the Hub becomes busy. The Indian community gathers to receive the Indian Ambassador H.E. Venu Rajamony on the last day of his Eindhoven visit.

During the visit the Indian Ambassador was hosted by the Mayor of Eindhoven John Jorritsma, the TU/e and by the High tech campus entrepreneurs. Yes indeed, the Indian tricolor flapped with energy in the Brabant wind. For more information about the Ambassador’s tour of Eindhoven you can visit this page.

The chairman of The Hub Bas van de Kieft received the Ambassador and his team. Ashok C. Kaushik, commercial affairs representative, Manohar Gangesh, in charge of consular affairs along with Lars de Vries of Brabant investment agency,  accompanied the Ambassador on his visit.

H.E. Venu Rajamony greeted everyone personally before addressing the gathering. The talk started off with the recent developments of India as a digitalized nation and highlighted information on the Aadhar card (not mandatory for NRIs). H.E touched upon various topics such as the importance of having an OCI card, Indo-Suriname connection, entrepreneurship in the Netherlands, student issues and taxes. He also shared insight on the role of the Indian soldiers who fought in World War I and amounted that Indian soldiers lay buried in 60 countries. He added that the embassy is more than willing to conduct exhibitions about the war heroes in museums, school etc.
H.E gave a gist of the events the embassy conducts and shared some insight into its agenda. To follow the events of the Indian embassy in the Netherlands, you can visit this page.

While answering the questions raised by the participants the ambassador threw light on various issues such as considering options for an Indian embassy contact center in Eindhoven. Furthermore, he cautioned students about signing contracts while renting accommodation and urged them to countercheck with this website when in doubt. On legal and visa issues the Ambassador emphasized that issues can be dealt only on a case by case basis. In a nutshell, almost every question was answered.

The participants reflected the diverse Indian population, representatives from the various ethnic groups such as The Indo-Dutch association, the Bengali group, the Tamil group Eyal Eindhoven, the Hamara group, the Marathi, Kannada, Telugu, and Malayalam groups were in attendance. A Surinam Indian running for office in the local election was also present.

Cheer and warmth – A contrast to the grey skies outside

The Indian community was visibly happy to see the ambassador reach out to the citizens because apparently, no one recalls of a similar approach by any former ambassador. H.E Rajamony dressed in grey overtones not only accomplished his mission with poise but also earned the respect and love of the people. The dignitary spent some time to have friendly chats with the attendees and inspired them through his humility. The bureaucrat patiently posed for pictures before bidding adieu to the citizens. In summary, the morning was well spent for everyone gathered in The Hub and the aura positive. 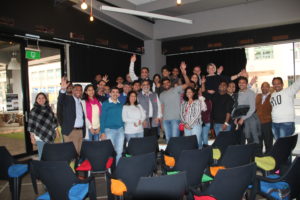 1 July 2022
If you have a consultation hour with your GP (huisarts) on Friday, most probably that is not going to be possible. The appointments are...