Home 10th Anniversary Mayor Jorritsma: ‘There is a war on talent’

“It is not only the big companies but also more than 6,500 small and medium enterprises (SMEs) in Eindhoven who are hungry for talent.” This is according to the Mayor of Eindhoven, John Jorritsma. Eindhoven News spoke to him at our recent 10th-anniversary celebration.

“This is one of our big issues. It is all about talent, talent, talent. We do not necessarily need foreigners; we need talent. And, in the Netherlands, we do not have enough talent because we have a limited number of people and educational facilities. So, we have to find talent from all over the world.”

“There is also a so-called War on Talent. Other regions in the world, like Silicon Valley, Shanghai, and Stockholm, are all fishing from the same lake for talent. As we are a high-tech, economically-booming region, we need talent badly,” he said. Jorritsma says that this talent comes from all over the globe. “For example, seven out of ten of ASML’s average of 250 new monthly employees are foreigners.”

Part of the ecosystem

Jorritsma wants internationals, as he prefers to call expats, to be part of the city’s ecosystem. “I think when internationals come to Eindhoven, in particular, they feel very welcome. The city is well-organised and stable with a good political system. But, after a few months, people realise Dutch people are not as hospitable as we think we are.”

He says it is then that expats start wondering where they fit in, especially socially. “So, we have to do our utmost to bring those communities together. Easy to say but not so easy to do. There are differences in culture, differences in language. Language courses are needed, schools, besides the International school, more information about each other and exchange is needed so that internationals can become part of the system.”

This is, Jorritsma says, where also the Holland Expat Center South, in Vestdijk, comes in. This centre is a valuable resource, also for spouses as “they tend to become socially isolated.” He says internationals can find information here to integrate. “We have a project manager that can help you join the system.”

This article is part one of a five-part series. In the following days we will publish the follow-ups. 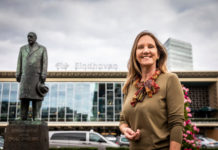