Home 10th Anniversary Ten years of Eindhoven News: getting expats out of their bubble

Meet Irene Martens, the global citizen. When it comes to the expat experience, you can safely call her an expert. After living abroad for 19 years, she has been the driving force behind Eindhoven News, the English-language news platform for the international community in Southeast Brabant, for ten years now.

At the very start of the (Eindhovens Dagblad’s reporter, Ad de Koning, with Irene Martens) conversation that took place in the Student Hotel Cafe in the city centre, she emphasises she did not start Eindhoven News all by herself. While socialising with internationals at that time, the lack of local news in English was apparent. Together with a few more expats and initiator, David Green, a Brit who lived and worked in Eindhoven at the time, Irene started on the Eindhoven News. “I thought it was a great initiative right away, and I was happy to be able to contribute,” says Irene. Initially, it was not much more than a few articles per week on a website. When it threatened to die a silent death two years later, it was Irene Martens who took the lead and, after seeing the potential, relaunched the site.

“I had a very small network then, but from there I started rebuilding,” says Martens (53), who grew up in Asten. “In the beginning, I really did everything myself.” Today, Eindhoven News has around 25 active international volunteers, and it reaches about 10,000 expats per week via the website, social media channels, and activities, such as meet-ups. That’s not bad at all, Martens thinks, more so if you know that Eindhoven News has been running, from the start, without any subsidies. 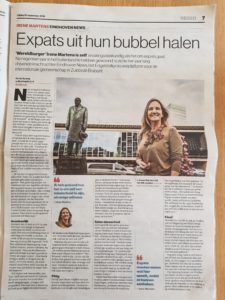 “I did try it though, you know. We could use the subsidy to extend our growth and to develop the community. How wonderful it would be to have (at least) five reporters who could go out every day to pick up unique stories and reports, to show even more the exciting things that are taking place. But, apparently, our activities can’t be categorised under one name; we were sent each time from the pillar to the post. At the Municipality they referred us to Brainport, at Brainport they pointed to the Expat Center, and from there back to the Municipality. That takes a lot of energy which I prefer to use for positive things, such as investing in my fantastic team and the daily running of things.”

“I am proud that I have managed to achieve this together with the many volunteers in recent years. We have grown by working extensively with other parties. Our main motto is to create a win-win situation for everyone. The volunteers find a place, get to know Eindhoven and develop their skills; the organisations find a publication on our site interesting, and this results in our network and reach increasing. It is a matter of having faith in what you do and believing that it benefits many people.”

Martens was 22 when she settled in Oman with her then-husband, who was working at Shell, in 1989. It was an easy decision on her part. “I had always wanted to go abroad; I am very adventurous. And I’m very curious. To get to know other people, different cultures. I’m still curious, even now.” She was very clear that she didn’t want the ‘typical life as an expat wife’. “A bit of playing bridge, golfing, and complaining about the maid,” she summarises. “I wanted to develop myself, be more than someone’s wife, move outside of the expat bubble, build something up.”

What also played a role in this was her ‘Calvinistic character,’ which she undoubtedly inherited from being an Asten farmer’s daughter. “I like to be active, do things myself. I am not the type to put my legs up on the couch while the maid cleans my house. It feels strange to me; decadent too. I can clean, so why not do it myself, right?”

So Martens, who has a tourist industry background, decided, in 1990, to do guided tours for international visitors all over the Sultanate of Oman from the capital, Muscat. This was exceptional as it was very unusual for expat women to work outside the expat community at the time. “I worked at a travel company with only Omanis and Indians.” She found it refreshing. “In the sense that I learned what it is like to be a minority myself, being the only ‘white-nose’. As a result, you realise that your own worldview, your own thinking, is just one vision.”

Five years in Oman was followed by four years in Brunei, where two of her three children were born. “In a jungle hospital with outdoor corridors.” Martens also followed her own path in that small Sultanate in the Far East. Among other things, she provided swimming lessons, taught Dutch, and organised events. When the family subsequently moved to Aberdeen, Scotland, where her youngest was born, something changed in these expatriates’ lives. “It was the West, but here we had our tropical years. Three small children and the pregnancies had also taken their toll. The northern climate affected my husband too – leaving for and arriving from work in the dark was harsh. It wasn’t easy.” Yet she also contributed to the well-being of expat women by organising courses while working for the Expat Spouse Centre in Aberdeen.

However, the family did not hesitate for a moment when, after four years in Scotland, Shell asked them to return to Oman again in 2002. “Because we already knew the place – the people, the culture; we both loved Oman.” Martens organised international events there with 5.000 visitors from all over the capital. She also set up a salsa dance school, where she spent six years and put her heart and soul into. “It was a great time! I felt like a camel in the desert. Among international people and, together, we formed a very nice, rapidly growing dance community.” In 2008, the family returned to the Netherlands, to the village of Liempde. “The children grew older, started high school. We wanted to go back to Brabant to have them grow roots somewhere; a place where, after all those wanderings and lots of goodbye’s, they could make friends for life. And I found it important to show them a broader perspective of the world than just expat life.”

After her marriage ended and children left home, Martens moved to Eindhoven. “Now I am right in the middle of it. Every day I am busy with international Eindhoven, socially and at work. It is amazing what happens here – the melting pot of cultures, the positive energy, the innovation, the creativity! With Eindhoven News, we can link all these people, by showing what happens daily in our area. People get to know each other that way and understanding grows. We are the bridge between local and international. Internationals need to know what’s going on here so that they can join in and connect to local life. We want everyone to be able to participate. The way I wanted when I was a new expat myself.”

Martens realises that there is a looming chasm in Eindhoven and the surrounding area. On the one hand, there are the internationals, highly educated residents, the fast trackers. On the other, a different part of the population that is involved with completely different issues. They do not always see the benefits of internationalisation. More interaction between ‘local and international’ is needed; the two worlds need to come more in contact with each other. “And Eindhoven News is the ideal channel – showing from both sides what is happening here and what people are truly involved with. We like to contribute to ‘one cohesive Eindhoven’.”

One more question: do you now feel like an expat or a Brabanter? With a smile: “I would say: a global citizen, with my two feet-on-the-ground mentality of an Asten farmer’s daughter.”

Eindhoven News’s 10th anniversary is going to be celebrated on Saturday, 21 September, from 14:00 until midnight, with various speakers and activities, at The Hub, 25 Vestdijk. Admission is free. More information on www.eindhovennews.com 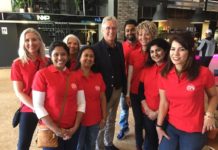