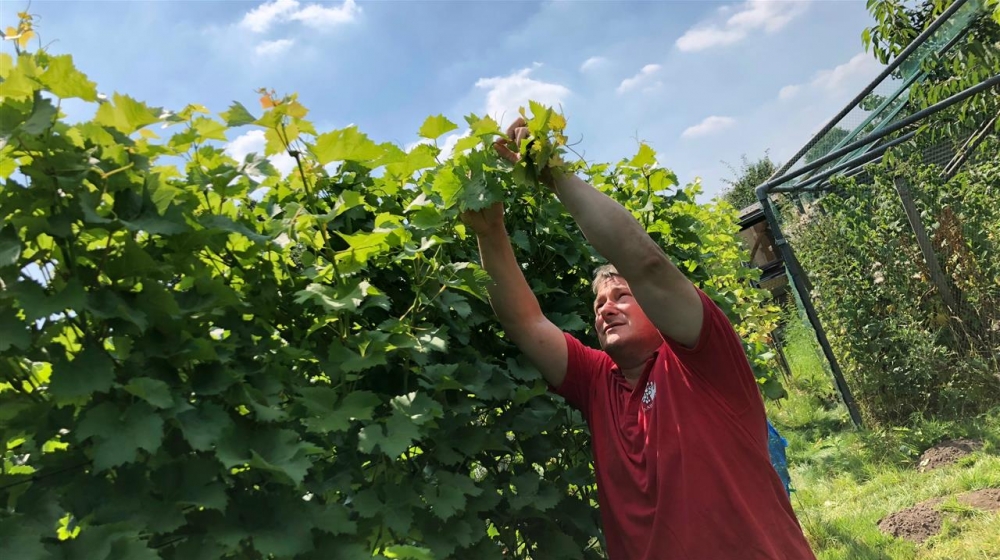 It might be the best year ever for the Espergaerde Vineyard in Eindhoven.

Harro de Cocq is a hobby farmer who grows wine grapes on a small scale on the Volkstuinvereniging (People’s Garden Association) Blixembosch on Esp. complex. “We had a record year in 2016 already, but if the weather continues like this, we surpass it this year”. The Eindhoven resident has about 50 vines and three kinds of grapes that are all looking beautiful.

For many farmers in the region, the hot, dry weather is a disaster because their crops are suffering heavily and are likely to fail. It is, however, a victory for Vineyard Espergaerde. “It is a multi-annual crop, and the roots run deep. Only the young plants are having a hard time now”. However, De Cocq is not yet celebrating because if it rains and hails suddenly, his harvest will also be gone.

“I have also considered to, if possible, buy or rent a larger plot somewhere, so that I can expand”. Because even though the Eindhoven wines are not for sale in stores, De Cocq’s hobby is craving more space. The winegrower has already looked for pieces of land in Best, among other places.

Eindhoven has a wine guild in which the hobby farmers are united. “I am one of the youngest in the guild now, but what the guild and I are hoping is that thanks to the good weather and the popularity of Dutch wine, the number of members is going to increase”.

Volkstuinvereniging Blixembosch on Esp has three hobby farmers who grow grapes and make wine. According to De Cocq, more people are working on winemaking in the region. In Veldhoven and Aalst-Waalre there are a few wine growers, but according to him, it is still not comparable to the French wine growers, despite the growing popularity of the Dutch wine.