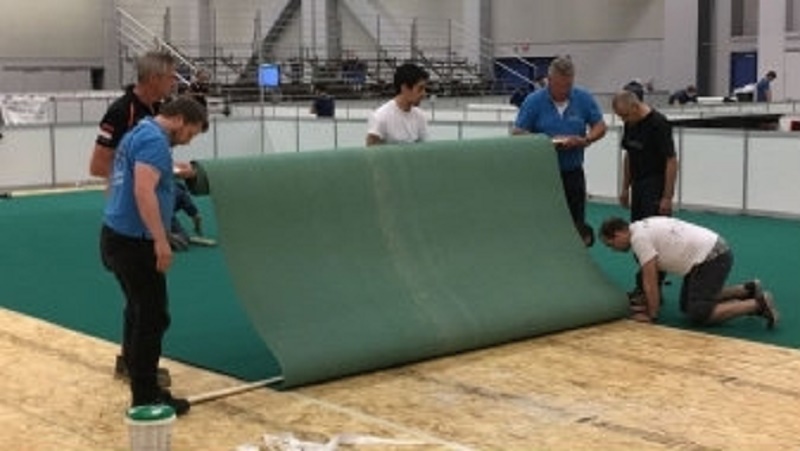 No robot football field to be found … No testing of robots possible! A bit of a hitch, a bit of a glitch – when the 2018 slogan on Robocup Internationa’s website runs “Are you ready?”

The team contacted the organization. Then they decided to take matters into their own hands. They would start laying the field themselves.

So Saturday, they set to work and that evening, the green field was ready. Mats covered wooden floors.

Tech United departed early to prepare for the games? They had intended to dot the i’s and cross the t’s: test and test again. Instead, after rolling out mats on Saturday; the team had to add lines Sunday.

Today, Robocup 2018 starts without a hitch – thanks to Tech United, the robot football team of the TU/e.

Interested in robot football? No need to head for Canada. There is also a Robocup@home, where robots compete against each other in carrying out all kinds of household tasks. Healthcare robots Amigo and Sergio are taking part in such competitions.

There are also competitions in the categories Industrial and Rescue. Perhaps robots to roll out green mats, draw lines and prepare football fields for future Robocups will be next?

Regardless: let’s hope TU/e will have a great time and a successful Robocup 2018!