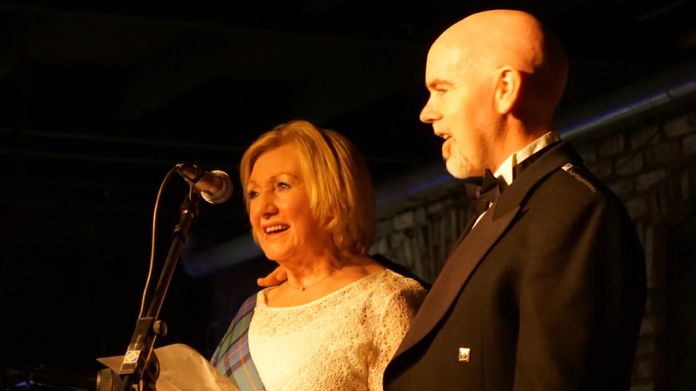 Lin Pender as one of the Hub Eindhoven for Expats’ founders is leaving Eindhoven this week.

She set up the Hub in 2009 together with Joost van Dijck. Now the heart of this social club is leaving for sunnier places.

Lin Pender came to the Netherlands with her husband Andy, who has been working for Philips ever since.

Before 2009 Lin and Andy had been organizing pub nights for ‘Eindhoven Expats’ to create an opportunity for internationals to meet: “a drink and a chat on Friday night”. This group became ‘The Hub Eindhoven for Expats’ after meeting Joost van Dijck who was involved in the International Quiz nights.

It grew into a large social network with the icing on the cake the physical location “the living room” of the Hub at Vestdijk 25, where a lot of activities are taking place these days.

Last Saturday it was the farewell evening of the Penders. If you walked along the Vestdijk no one could blame you for thinking you were in Scotland or Ireland. The Celtic music filtering out from the Hub and the vision of people dancing exuberantly in kilts are not a commonplace sight in the Netherlands.

The Hub’s Kilts and Celts evening was a two part event with the first hour the private farewell party for Lin and Andy. They were able to say goodbye to Hub friends and the Hub, represented by Bas van der Kieft and Joost van Dijck, was able to express its thanks and affection of the couple with speeches and gifts. Volunteer, Bex Harding, sang two traditional Scottish songs, The Flowers Of The Forest and the Skye Boat Song. Then the couple celebrated their Scottish nationality with a ceilidh (a traditional Scottish dance party).

At 21:00 hrs the Hub opened it’s doors to the public and the ceilidh continued with great music from the Assassenachs, the dances ably taught by Margaret Lambourne and supported by members of Eindhoven’s Thistle Club. The music and dancing was enjoyed by a large crowd of both and old alike. The Hub also offered a selection of interesting whisky to sample and for a short time we all became Celtic.