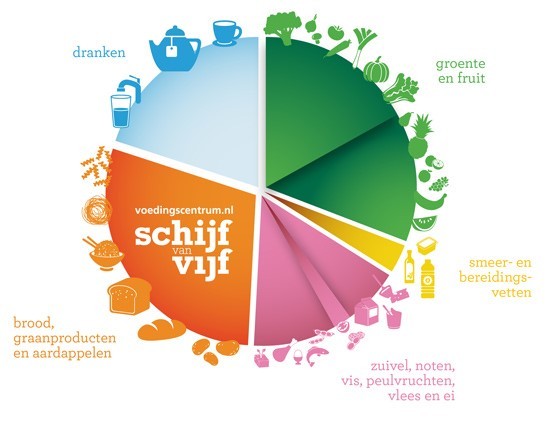 Let’s talk food. Or, more specifically, let’s talk about the latest recommended food guidelines according to the Dutch ‘Voedingscentrum’ (nutrition centre), a semi-government institution that aims to help people make healthy dietary choices. I will write about these recommendations, in opinionated fashion that is, and you may want to sit at the edge of your seat spellbound as you read my thoughts on these food matters.

After all, don’t we all like to learn more about food and want to know what others think of what is healthy or not? We can even debate what is tasty, but I am afraid there is no accounting for taste. Pizza is tasty, we can agree. Yes? Still, food is personal and so please disregard anything I say that strikes you as plain wrong or inapplicable to your life.

I’m writing about these matters a week later than I initially planned to. It is now roughly a week ago (March 22, 2016) that the Dutch version of the internationally well-known food pyramid got updated by the aforementioned Voedingscentrum, I mean the Dutch version of these guidelines, better known as the ‘Schijf van vijf’. However, on that March day I heard about events much more pressing in nature. March 22 was the day when Brussels was the target of heinous attacks. My thoughts were very far away from food or any culinary subjects for days, hence my delay and hence this article is opinion instead of a news item. It has already been covered as news, also on Eindhoven News.

Disclaimers out the way, the Voedingscentrum has published their updated recommendations in a circle-like chart called ‘Schijf van vijf’. As the name implies, there are five food sections. In The Netherlands, it never was structured like a pyramid, but in some other countries it was. Previously, it went under different names in this country, such as ‘Maaltijdschijf’ (meal disc) and ‘Voedingswijzer’ (food guideline). I did grab a copy of the British and American version, too, and found that the recommended foods are basically the same between the current versions. But more on that later. By the way, in Britain it’s called the Eatwell Plate and as you can guess, it’s also a circle (or plate). Since 2011 the American version (USDA guidelines) is a plate too; this is one version that used to be a pyramid prior. As Americans love puns and food, they now call it a pie chart, though I would expect the Brits to be more into pies (and wordplay).

Back to the Dutch ‘Schijf van Vijf’: It is easy to see what food groups are recommended as the main dietary components, namely fruits and vegetables, (wholegrain) products, and the animal-produce section are the three biggest, with plenty of healthy fluids such as water or black or green tea as perhaps a tie for third place (tied with animal products), and liquid or spreadable (vegetable) oils a distant fifth. It is not possible to see any recommended quantities, but vegetables went up from 200 to 250 grams a day, so snack on your broccoli and carrots throughout the day.

I very much applaud the nod to unprocessed foods; these are usually a much better choice over processed foods, as the latter usually contain lots of added sugar, salt, and other questionable ingredients aimed at making you eat more and ensure the products have a longer shelf life, which is not necessarily good for you. The processed choices are, however, the domineering factor in supermarkets. The aisles are 99% processed products, with most of the unprocessed foods such as fruits and fresh meat sort of pushed out to the edges of the supermarkets. I hope people can navigate their way around the modern food landscape. It’s not necessarily easy to load the shopping cart (or handbasket) with unprocessed foods only. You have to ignore a lot of shiny packages and bargains that try their best to attract your attention; and unprocessed can mean you have to spend a little more time on cooking. Oh, and I am not on a crusade against processed foods: some of it is quite nifty, such as yoghurt, tomato juice, and wholegrain bread.

Less helpful perhaps is the absence of any more specific information on amounts or relative amounts of the food groups. More information on serving sizes might have been instructive to some. Of course, the caloric intake should be individually tailored. Still, it would be interesting to see that if 250 grams of vegetables a day are recommended (yes it is and many people unfortunately do not even get close to this amount), what that means for how many grams of, say, bread or pasta. In its favor, this chart leaves plenty of room for people to think for themselves and experiment to find out what works for them. Some people do not wish to consume animal products or they can’t even tolerate for example (cow’s) milk. These people can for example eat more lentils or beans, and these legume-type foods are also a sort of new recommendation; so many people don’t eat these, while they were once staple foods of the population and are very healthy. They contain many proteins and these are essential for the human body; just make sure you get enough of them and include those the body can’t make itself. Mixing rice and lentils, for example, leads to a more complete amino profile for these vegetable choices. Eggs, however, contain all essential ones, as does meat.
The Schijf van Vijf is definitely not a tool that you can follow blindly. And that’s how I like it too, as I disagree with some of its contents. I wish to urge people not to take these recommendations as gospel, as it were.

For example, and I risk ending on a negative note, I would strongly like to urge you to research vegetable oils. These are 9 times out of 10 unhealthy. I’m not talking extra virgin olive oil, of course, but the stuff many out of tradition smear on their bread or use as cooking oils. These cooking oils or spreadable oils – margarine, among others – are heavily processed and usually contain partially hydrogenated oils, also known as trans fats. These are bad for you in any quantity. These products are also often heavy on omega-6 fatty acids, of which the standard diet is already satiated with. Best is to keep these in a 1 on 1 ratio with omega-3 fatty acids or at least not let the 6s way out of line. Notice also the extensive health branding of these oils; most stuff that is flagrantly touted as healthy on the packages is not. The real healthy choices sit quietly in the vegetable area or somewhere else, sort of hidden and not rarely on the lowest shelves.

My other gripe is the Voedingscentrum’s obsession, it seems, with the ‘bread section’. I call these products the carbohydrate-rich foods. If you’re not careful in the places where you shop or eat, these items can quickly add up the calories you consume and lead to spikes in blood sugar and then sudden lows, making you hungry and tired and desperate to eat more again. The healthiest choices are those foods in this section that contain as little simple sugars as possible. The slow-digesting foods such as oatmeal and wholegrain bread (100%) are solid choices, though. All those cookies, pies, and pizzas usually aren’t, but these are very processed, so there’s your hint to avoid those as much as possible. To be honest, those unhealthy choices are not featured on the chart. But why so much of these bread foods, I wonder. True, carbohydrates are preferred by the body to convert into glucose; fat and protein take more work to turn into fuel. Still, these foods are easily consumed too much of and guess what happens then… So keep your eye on that bowl of pasta, even if wholegrain, because you might eat too much of it.

Protein-rich foods are much more satiating, so you don’t easily overeat. Add plenty of vegetables for the micronutrients and fiber, and be careful with the carbohydrate sources. One reason the Voedingscentrum relies so heavily on bread may be due to iodine that is added to most bread, and iodine is essential to get enough of. Still, there are other sources of iodine, such as sea vegetables or (shell)fish. I am of the opinion that good bread is hard to find; most of it is just flour with all the nutrients stripped, not wholegrain, and it contains added sugar (dextrose) and the (partially) hydrogenated oils. Good bread can be found from quality bakeries and health food shops, which don’t by the way add iodine, so do get your two-or three-weekly portions of MSC fish or sea vegetables. Cook with wakame or kelp for example.

Well, I think I may have got carried away, but I do hope you carried away something from this. Take care and bon appetit! I must prepare a meal for myself now and follow my own advice.