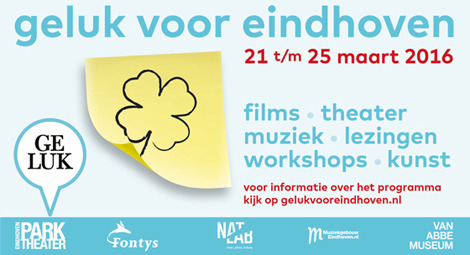 For the week of March 21-25, Eindhoven will be hosting a variety of activities and lectures on the theme of happiness during the event “Geluk voor Eindhoven”. The goal is to make people feel good, and to provide a platform for positive exchanges between locals and visitors of the city.

Happiness for Eindhoven is an initiative by Parktheater and Fontys University of Applied Sciences. The first edition took place in March 2015, and they will be joined for this second edition by concert venue Muziekgebouw Eindhoven, cinema Natlab en Van Abbemuseum.

This collaboration promises to bring even more lectures, art installations, film screenings, workshops, and theatre productions to the city. Another component of Happiness for Eindhoven will be the revealing of 14 new "happiness spots", known as Hap Spots. These spots are an addition to the 11 places that were declared Hap Spots in 2015.

To determine which spots in Eindhoven deserved this title, students of Fontys University’s HRM and Psychology departments interviewed random passers-by about places in the city that made them feel good. Last year’s happiness spots included castle Eckart, community centre ‘t Bellefort, and the Collse watermolen (water mill). More information about the project can be found on http://www.hapspots.org/en.