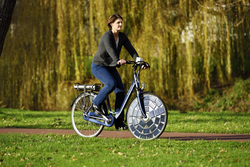 The prototype of the first Solar-Bike, S-Bike for short, was presented in the Auditorium on Tuesday afternoon. The electric plugless bike has been developed by the Eindhoven Solar Application Lab (SAL), in cooperation with parties including TU/e.

The battery for the electric pedal assistance of this S-Bike charges itself via solar cells fitted into the front wheel. TU/e students assisted in the development, among other things by conducting a feasibility study into the product idea.

The university is also involved in the follow-up steps, which includes testing the technology used on a dozen bikes. Only after that test, which is expected to finish early in 2017, will the step to the market be taken.