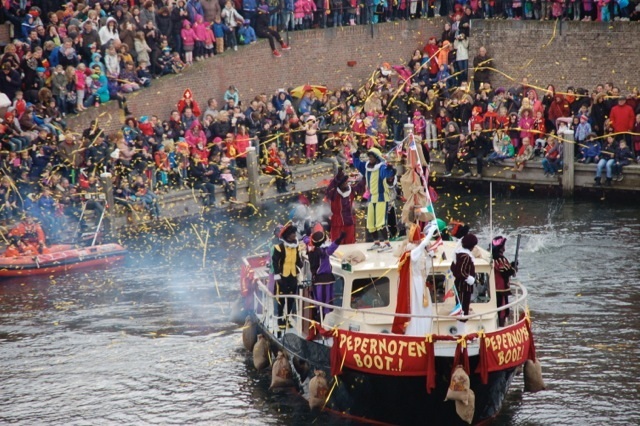 Living in the Netherlands introduces you to Sinterklaas and Zwarte Piet at this time of year. I’m not going to talk about Sinterklaas’s helper though, but the man himself. He is apparently a bishop, from the Middle Ages, who lives in Spain and arrives in the Netherlands and Belgium mid November by steamboat, travelling around surrounded by throngs of happy, singing children and his controversial helpers.

This austere, slim figure wearing clerical attire, a mitre and carrying a staff does not, for me, inspire thoughts of a kindly gift-giving stranger but seems quite intimidating! However, you only have to see the children clamouring to see him and his horse Amerigo, to understand the joy he brings to Dutch homes in the weeks before Sinterklaas Eve, on December 5. Now on the plus side, he does leave small gifts in your shoes (if you’ve been good) for weeks before December 5th. On the downside, what do you have to anticipate once Sinterklaas Eve or Sinterklaasavond, is over?

Growing up in the UK, I of course, waited with bated breath for Father Christmas as a child. He has been around since Henry VIII’s time and originally was dressed in scarlet or green fur-trimmed robes and was, and is, a portly chap! In Dickensian times he became the face of "good cheer" and was made even more famous by his role in Dicken’s Christmas Carol. When I was a child I don’t remember Father Christmas being so commercialized as now, and we definitely didn’t go to stores to have our photos taken with him. We knew he was coming and hung stockings, on the ends of our beds on Christmas Eve, desperately trying to stay awake so we could see him secretly filling them with gifts. For my children he remained the affable stout old gentleman from the North Pole, who travels the world in a single night with eight reindeer.

Of course the American version, Santa Claus, is becoming better known to us all. He seems to be a blend of all the versions, Santa Claus – Sinterklaas, jolly old guy – Father Christmas. Some of the fame of Santa Claus is due to a poem written in 1823 by the American Clement Clarke Moore, what we now know as "Twas The Night Before Christmas," and cartoonist Thomas Nast, who helped create the image we know today, in 1863. As we all know Coca-Cola’s advertising campaigns have helped perpetuate the familiar image in the last century. Santa Claus is big in the USA from charities dressing up their "collectors" standing on street corners ringing their bells, to mall Santas offering photo opportunities and Hollywood’s movies.

Santa/St Nick/Saint Nicolas/Father Christmas remains a jolly old gentleman, dressed in a fur trimmed red outfit in some countries and a clerical saint in others, both spreading joy and gifts around the world. The Sinterklaas link remains with the bishop’s staff, now a red and white candy cane and the clogs by the chimney became stockings hung by the chimney. All of these incarnations continue to spread the joy of giving so whether it be a jolly, bearded, chubby old man dressed in red or a serious looking bishop I embrace the delight spread by an international tradition.