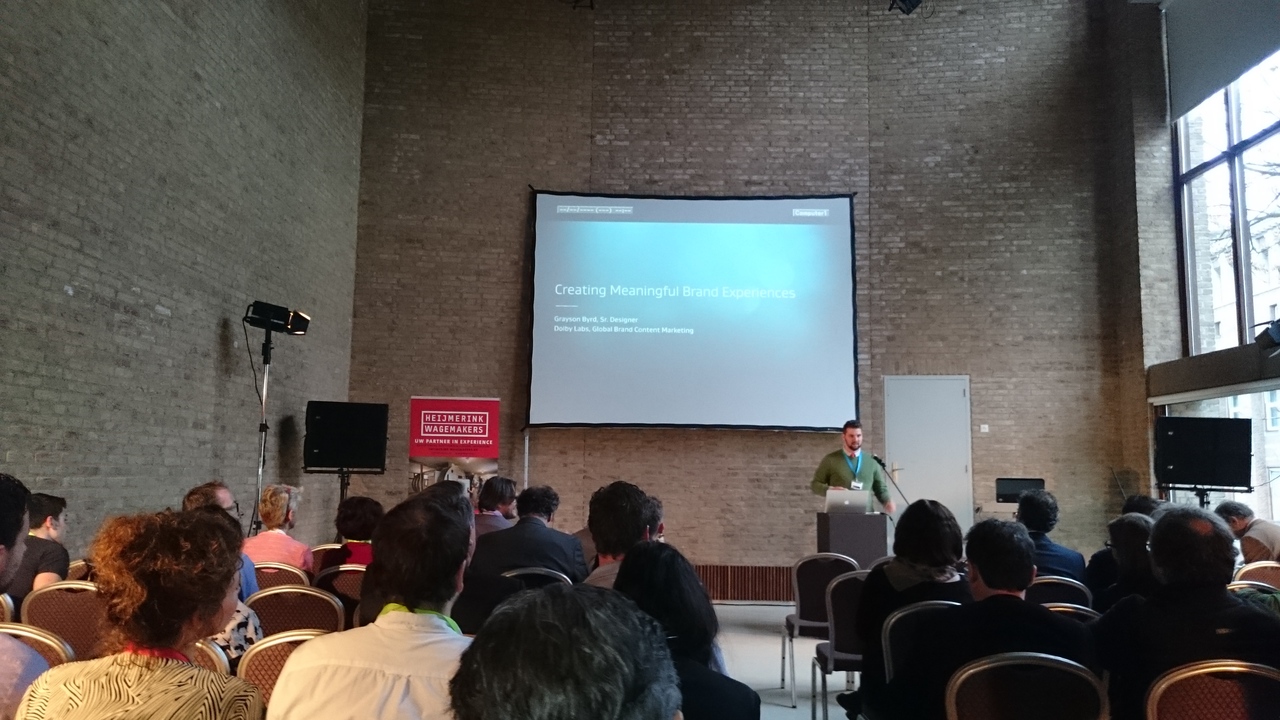 “Tell me and I forget, teach me and I may remember, involve me and I learn.” – Benjamin Franklin

This famous quote from Benjamin Franklin was the main sentiment that was reflected throughout the presentations as part of the Experience Design Conference I attended at the Designhuis in Eindhoven.

The Keynote speakers of the day Grayson Byrd from Dolby Labs USA and Laura Aalto, Communications Director at Design Driven City, Helsinki set the tone for the day sharing with the audience about Experience Design from the perspective of their respective organizations. Both the talks highlighted the importance of people-centeredness, emotions and stories among other things and the role each of these elements play in making everyday experiences better.

To me, Laura’s talk was a huge motivation to check on where Eindhoven stands in terms of its design drivenness. Turns out, Eindhoven and Helsinki share many commonalities. Both cities have designers working with the city councils. In fact, Eindhoven is the first city in the Netherlands to have a designer working with the city council. Both cities have a design week and events encouraging startups. Both cities also have various projects running in parallel in areas like sustainability, safety and have living lab environments.

The other presentations in the day dealt with very engaging topics. ‘Value Creation through Eexperience’ by Albert Boswijk, focused on emotions and experience. Using a quote ‘Emotion is the thermostat of our life’ by Arnold Cornalus, Albert spoke about primary and secondary experiences and how deep emotional experiences effect our life and our choices.

In his interestingly titled presentation ‘Why we shouldn’t expect a perfect AI’. Alvaro Soto from IBM Watson introduced the audiences to Rosa and Rumba, robots that cook and clean. Sounded great and there was more! His presentation discussed Artificial Intelligence and how to make an experience with AI more humane. When I spoke to him after the event, he told me that the connections he made at the event and the content of the event have seeded new ideas for future projects he would like to initiate back at IBM Watson, USA.

The presentation by Marco van Hout from MediaLAB Amsterdam touched on a totally different topic of ‘Design across cultures – A Common Language for the Design Field to Foster Experience-Driven Innovation across the Globe’ and spoke about cataloguing design inspired solutions from cities across the globe. Seemed like a fantastic idea that would connect people better.

The afternoon was divided into parallel sessions in: ‘Experience design seen from the (end)user perspective’, ‘Project Living Lab Stratumseind’ and ‘Augmented and virtual reality applied in experiences’.

Prof. Paul van de Laar spoke about ‘Experiencing the city: city museums and urban engagement’ reminded me of the ‘Discovering Eindhoven’ project that I began for Eindhoven news that I need to restart. His concept of the need of museum curators to metamorphose into being heritage consultants was a refreshing take on museums and curators of the future.

Project Living Lab Stratumseind sessions were a closer look into the amazing stuff happening literally in our backyard! Various speakers spoke about different aspects of the Project Living Lab Stratumseind. Antal Haans, Assistant Professor, University of Eindhoven spoke about ‘De-escalate at Stratumseind: Studying the effects of dynamic lighting on aggression in a naturalistic setting’, Albert Seubers from Atos International, about ‘Economy of Data’. Peter van der Crommert from DITSS, about ‘TRILLION community policing at Stratumseind’ and Tinus Kanters, Project Manager Living Lab, Stratumseind 2.0, City of Eindhoven moderated the event and spoke about the project.

Finding out more about this and other design based initiatives from the city seems like a better way to do justice to the amazing work that the city is doing. That is exactly what I plan to do, on the other hand it also gives me the topic of my next article!

The session: Augmented and virtual reality applied in Experiences had speakers like Tina Stroobandt, who spoke about ‘Mixed reality: the future of mobile marketing’ and Léon Wennekes who spoke about ‘Virtual Reality Experiences for (p)leasure and education’. These sessions were intriguing as well and shared the amazing possibilities in the areas of creating lasting experiences through technology in augmented and virtual reality.

Organized by Jakajima in collaboration with Eindhoven, Peter Hermans moderated most of the sessions adding his inputs and asking the right questions. He hopes that the event will help in integrating the soft and hard sides of Eindhoven that will lead to future innovations. Being an international event, a lot of the international participants were introduced to the city through the event and were looking forward to enjoy GLOW later in the evening.

Overall, lots of new insights, inspiring presentations and the prospects of a living in a human centered, design driven Eindhoven made my day!