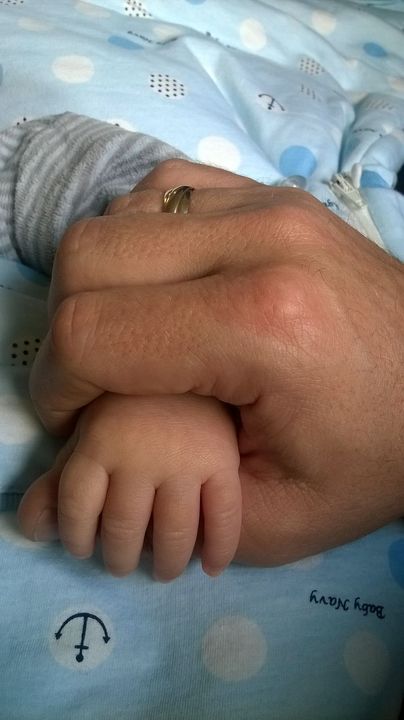 You can make a Dutchie very happy by saying, “gratis (free of charge)”.

Our baby boy is a true Dutch. He practiced the philosophy to the fullest. He was apparently satisfied with this all-inclusive hotel (my belly), especially when it costed him nothing. So, you have probably guessed. My plan to give birth at home was canceled in the end and he was born two weeks later than the due date in the hospital.

With the baby growing in my body, I got 9 months to slowly understand the idea of being a mother; I felt the baby and he felt me as well. However, hubby only got one second to digest the whole new change.

I experienced our son with great interest and hubby totally marveled at his 10 perfect fingers and every little cute feature on him. Since the first minute, he has become a magnet to his daddy.

Three days after our son turned one month old, hubby had a one-week business trip in Hong Kong. I sent him photos and videos every day so that he wouldn’t miss any moment of his growth. The day before he came back home, we talked on the phone, he said, "Our son is now five weeks old and I am away for a week. His daddy is not next to him for 20% of his life! This doesn’t sound good at all." I thought I was the sentimental one.

The first week we had him at home, we turned the baby monitor on all the time. We were very alert to every sound from his room, especially when we wanted to take a shower together.

It is true that we could have taken turns. But remember, it is equally important to keep the romance alive after the baby is born. A shower together is intimate and relaxing; meanwhile, it is economical. Although breastfeeding saves us some money, 6-8 diapers per day is the expense we can’t avoid. (Listen to what I just said, am I converting myself into a typical cost-conscious Dutch?)

Ok, back to the romantic point. We like to take a shower together and we don’t want to quit that just because we have a baby in the house now. The first few times in the shower, both of us looked at the baby monitor every few seconds. I know, it doesn’t sound romantic at all and it wasn’t.

And after a few times? Now we leave the monitor on the charger and close the door. When it is quiet out there, we feel relieved and enjoy the shower. When he is crying, we also feel somewhat relieved and enjoy the companion of each other. How could we act like that? Just so you know, the harder he cries now, the better and deeper he will sleep later.

I hope we don’t sound like terrible parents and I honestly don’t think we are. It is a lesson we have learned from our baby boy. He teaches us to laugh things over and grow up with him.

The other day hubby was cleaning our son at the changing table. The mission was to quickly pull out the dirty diaper and slide in a clean one. Apparently, he was not fast enough. His hand was covered with poo within seconds and the wedding ring was buried underneath.

Seeing that, I teased him, "Looks like our marriage is covered with shit". He replied with a wink, "I’ll rinse it and it’ll work just fine again."