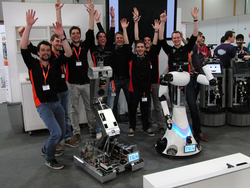 The TU/e care robot team won a gold medal at the RoboCup German Open in Magdeburg. The home teams of the universities of Koblenz and Bielefeld won second and third place respectively.

The Eindhoven robots AMIGO and SERGIO compete in the @Home League. The goal of this robot sport is to speed up the development of independent care robots that can help people in need, so they can stay in their homes independently for a longer period of time.

Last year, the TU/e team won second place in both the German tournament and the World Cup. The team members hope to win the World Cup in July as well.

It is the first time the Eindhoven care robot team grace the highest platform on the medal stand at an international tournament. Their results have been improving since their start in 2011 and this win continues that upward trend.

The organization raises the standard to increase technological development for every cup, so each team must improve themselves. The high ranking indicates that the TU/e team have made more progress than any of the other teams.

All eyes are now on China. The Robot World Cup will be held there from 17-23 July: a larger tournament with strong players. "We’ve seen here there is room for improvement still. But we definitely have a solid foundation to travel to China with confidence. We want to win this time", says team leader Janno Lunenburg.