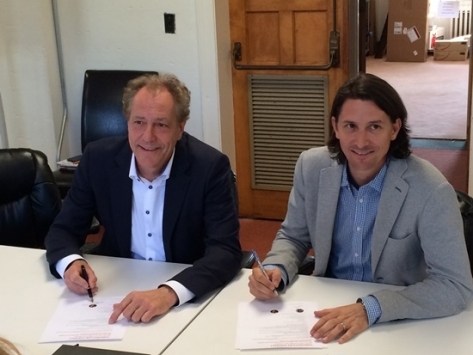 The prestigious Singularity University (SU), headquartered in Silicon Valley, is set to open The Singularity U – The Netherlands in Eindhoven, making it the first SU campus established outside of the US. The photo shows Mayor Rob van Gijzel from Eindhoven and Rob Nail, CEO from the SU, signing the construction contract.

SU paves the way for breakthrough innovation by bringing together scientists from all over the world who combine advanced technologies to offer solutions to global problems. SU fosters a favorable environment for tech start-ups.

The founding of SU in the Netherlands is the result of a joint effort between the City of Eindhoven, the Ministry of Economic Affairs, the cities of Amsterdam and Rotterdam, and Health Valley/Radboud University Nijmegen Medical Centre in Nijmegen.

The initial was in November 2014, when a delegation led by CEO Rob Nail visited the Brainport Eindhoven Region. The coming six months will be key in working out the details of the contract to determine keyleadership at the institute as well as its exact location in Eindhoven. The official opening is scheduled to take place in November 2015.

The Singularity U – The Netherlands will focus on the global challenges of Health, Mobility, Water and Agrifood, sectors in which Dutch scientists and companies are world leaders. While the main activities will be in Eindhoven, the SU in the Netherlands will also deploy activities in Nijmegen, Rotterdam, Amsterdam and Delft.