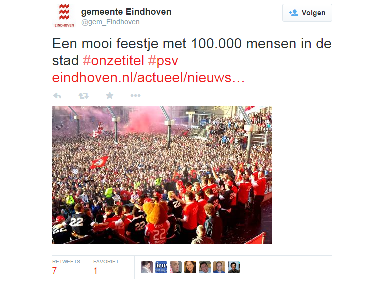 At least PSV 100,000 fans gathered to celebrate their winning of the Eredivisie 2014-2015 at the Stadhuisplein (in front of the Town Hall), yesterday in Eindhoven.

The municipality of Eindhoven speaks of an "impressive championship celebration". The ambulatory services were on alert and took action several times.

In total only 11 patients who took part at the festivities had to be taken to the hospital, compared to other big celebrations the number is said to be relatively small.

The police reported some fighting amongst visitors, and violations such as urinating in public were fined.

Mayor Van Gijzel said that the city can look back on an "extraordinary" celebration with no incidents. "This is a compliment to all PSV fans who came to cheer our champions today," said the mayor.

The PSV players and staff made the traditional tour through the city on a "flat cart" (parade float), cheered by an enthusiastic crowd. Fans stood rows deep along the route to catch a glimpse of their heroes.

The flat cart rode through the Mathildelaan, Willemstraat and Wal and arrived at the square of the ‘Gemeente’ Eindhoven (Town Hall) at around 17:15. On the market square in the centre, the fans could follow the show on a big screen. The squares were so crowded that the municipality officers had to redirect visitors to other places along the route.

The national champions were welcomed on stage by, among other Guus Meeuwis. One by one the PSV players were serenaded by the public.

The event ended at 20:00. The unofficial championship celebrations, nonetheless, went on long after.