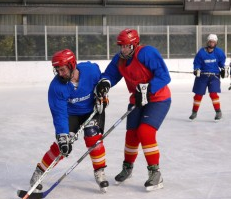 The intention of alderman Bianca van Kaathoven of Sport to close the IJssportcentrum Eindhoven on 1st July next year is a big problem for the TU/e’s students involved in Isis speed skating and the ice hockey association, Icehawks students.

Isis has started a petition. "It will be terrible for our association if the rink closes." Says Katja Heidweiller, president of Isis, the Student Skating Associations (studentenschaatvereniging) with nearly one hundred members in the Cursor, the university site.

According to Heidweiller, Isis could hardly exist without this rink. The nearest rink is in Tilburg and that is almost an hour by train and bus.

The municipality of Eindhoven has to increase budget cuts and sport will bear the brunt. Football and swimming are spared for now, skating however gets no preferential treatment. The alderman wants to close the rink by 1 July, 2016.

Heidweiller thinks it is a missed opportunity. "The municipality wants everyone to sport, even the elderly. Skating is a sport that even the elderly can participate in."

Isis along with the Ice Club Eindhoven has started a petition to keep the ice sports centre. Until now, nearly 600 people have signed. "On Facebook we have three thousand likes, we hope that many of them are also going to sign."

The plan must still be approved by the Eindhoven city council. If the alderman’s proposal is approved, it will affect several clubs and associations such as the Eindhoven Kemphanen and Kids on Ice rink.

Worst of all, the Netherlands’ fifth largest city has to do without an ice sports centre.