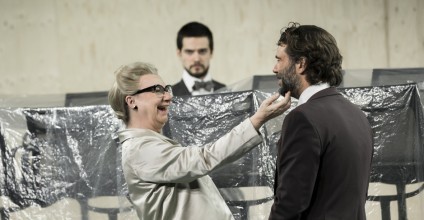 Although the play ‘Koningin Lear’ (Queen Lear) in Parktheater on 28 March is in Dutch, it can be viewed by the international audience too because all dialogues are translated and surtitles can be read simultaneously.

We, as Eindhoven News, visited the show in Stadsschouwburg Amsterdam, to have a preview and test this multi-lingual show.

As the word implies there is a display mounted above the stage. All conversations happening on stage can be followed thanks to the excellent English translations. Compliments.

The play is as you would expect a Shakespearean performance to be. Many words and long sentences are spoken; long literate, poetic, dramatic lines rattling across the stage.

To be able to watch the play, observe the details of the characters and of the backdrop change during the 3 hour show (not including the break) is a challenge. A little knowledge of Dutch helps so you don’t have to look up all the time in order to read the translation. In Stadsschouwburg Amsterdam, the display was rather high so sitting more in the back of the theatre enabled a quicker switch between display and stage. Sitting in the front would cause neck pain I guess.

In Queen Lear, the adapted version of King Lear by Tom Lanoye and directed by Eric de Vroedt, not a man but a woman is in power. However, her fate is the same: in an effort to divide the international family business between her three sons, Queen Lear is headed for the abyss. Leading Lady Elizabeth Lear is played by Frieda Pittoors, a well-known actress of the Dutch and Flemish stage.

From small beginnings, the firm has prospered and grown to incredible proportions. In the first act, ‘Queen’ Lear announces that the company is to be divided up. She demands that her sons take an oath of love and allegiance. The youngest son refuses, with far-reaching consequences. Lanoye paints a portrait of an elderly businesswoman who has lost all sense of reality. She is unable to use her power to solve the very real problems all around her. She is concerned only with popularity and reputation. With Lear, not only a woman, but also a company, a family, a whole world are going under.
Step by step we see the process of decay materializing, during which grand literary vocabulary is used.

A few surprising (humoristic) elements can be seen in this vast contemporary piece, just go and see for yourself…