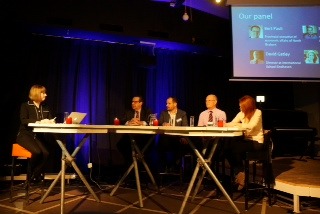 Last Wednesday, on the 25th of February, internationals got the rare opportunity to share their experiences and challenges they face while living in Eindhoven. The Hub Eindhoven organised a debate titled “The War on Talent”, focussed on obtaining and retaining international talent in the Eindhoven region.

Guests in the audience were representatives from local companies and organisations, as well as an estimated number of 30 internationals – which in this setting were representing the over 35,000 internationals in the Eindhoven Region. The panel of the debate included Bert Pauli, provincial minister of economic affairs of Noord Brabant, Stefan Hermans, senior director Human Resources from NXP, David Gatley, director from the International School Eindhoven and Ioana Iliescu-Jack, co-founder of the Expat Spouses Initiative.

The main theme of the debate centered on the premise that the regional economy is, to an extent, dependent on the influx and retention of highly-skilled migrants. The demand from companies is growing continuously and local graduates are not nearly enough to cover it. The obvious solution is to attract more internationals to the region. The suggestion from Ioana Iliescu-Jack was to use the human capital which is already existing in Eindhoven. Putting efforts into reintegrating highly-educated and experienced international partners into the work market, will also reduce the turnover of expats, Ioana states.

The discussion opened with the issue of general family life for internationals: how people experience their arrival in Eindhoven, and if finding their way around is easy enough. This question got further extended into pain points expressed by internationals who want to stay in Eindhoven for a longer period of time: finding appropriate housing, feeling welcome, or access to relevant information in English.

Two other extensive discussion points were healthcare and schooling. Internationals from the audience were remarkably vocal about their personal experiences with the local healthcare, whether in hospitals or at the GP’s practice. A few internationals confirmed that even though they pay for a Dutch health insurance, they prefer to seek treatment in their home country even if it means increasing their own personal costs. The reasons for this were unfortunately not explored any further, but speculations were made on how internationals might find it easier to communicate health issues in their native language, or that some might prefer continuing their GP-patient relationship because of the trust they built in the years prior to relocation. Nevertheless, it appears there is a light at the end of the tunnel for internationals in Eindhoven: during the discussion, Kris de Prins, director of the Holland Expat Center South, mentioned that a new health center will open in Strijp-S on May 1st, specifically designed to meet the needs of the international community. Here, internationals will have consultations, information and help in English, as well as other languages.

In the schooling section of the debate, the main concerns were over the international primary school having reached capacity. Considering the continuously growing number of internationals in Eindhoven, this remains a problem which needs to be solved very soon. If Eindhoven region will not be able to provide schooling for the children of expats, then "the war on talent" will be lost. David Gatley, director of the International School Eindhoven indicated that they are already reaching out in order to solve this problem.

An hour and a half of debate proved insufficient for discussing all the points in detail, but as a closing statement Ioana Iliescu-Jack, co-founder from Expat Spouses Initiative, acknowledged there are a great deal of organisations and initiatives which address different parts of the overall problem of living-in, but in order to create an overall solution all stakeholders need to work together to create a comprehensive ecosystem that addresses all issues – from the most basic needs to the most complex.