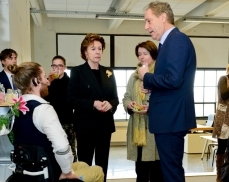 StartupDelta, the initiative to promote and improve The Netherlands as a startup hub, has announced one of their main advisory boards: an International Circle of Influencers (ICI).

The circle consists of startup-ecosytem builders from outside The Netherlands, investors, corporate CEOs, former founders and Dutch politicians. Rob van Gijzel, mayor of Eindhoven, and Peter Wennink, CEO ASML, are representatives of the Brainport Eindhoven Region.

The goal of the circle is to provide expertise and to challenge existing policy frameworks. The circle consists of, next to Neelie Kroes and Constantijn van Oranje, fourteen independent members. The formation of the circle was started in November last year when Neelie Kroes accepted her role as Special Envoy in November, but was only announced this week. The circle is intended to meet a few times a year to coordinate their actions. It is an informal network.

A positive aspect of the circle is its diversity: it brings together the corporate and the startup world and also international and local thought leaders. The only critique one can have on the current circle is gender bias: only two leading women (Sherry and Reshma, both international) next to twelve men. StartupDelta is however working on extending the circle further, and hopes to announce a few more members in the coming weeks.