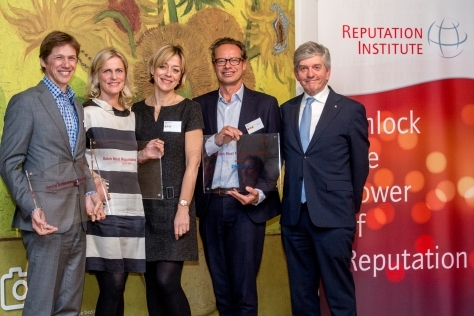 Two strong challengers and negative publicity in the USA have failed to dent Royal Philips Electronics’ eight-year reign as the Dutch firm with the best reputation, according to an annual online study by the Reputation Institute, in conjunction with Rotterdam School of Management, Erasmus University (RSM). The study looked at the reputations of the 30 largest Dutch companies during 2014 and asked the Dutch public if they trusted and respected companies on the list and why they admired them.

The Reputation Awards were handed out on Wednesday evening at the Van Gogh Museum in Amsterdam by Professor Cees van Riel, Professor of Corporate Communication at RSM and co-founder of the Reputation Institute.

Philips’ reputation has broken a world record, because not only is it the most reputable of the 30 largest companies in the Netherlands, but no other company in any of the other 32 countries studied has achieved such a long run at the top of its national reputation league. The international study has been running for the last 15 years, and looks at the 30 to 50 largest companies in 32 countries.

Challengers for Philips’ top position in the Netherlands in 2015 were dairy manufacturer FrieslandCampina and semiconductor technology company ASML. For nearly a decade, FrieslandCampina’s reputation rode high on its great product evaluations, appealing corporate social responsibility (CSR) efforts and sound governance. ASML took fourth place in the overall Dutch reputation ranking and led in three of the seven drivers of reputation: innovation, workplace and leadership. ASML topped the Dutch reputation rankings for CSR in 2014.

Rabobank is no longer part of the reputational elite in the Netherlands and has plummeted into 16th place after a number four ranking in 2013 and number eight in 2014. Rabobank also lost its position as a reputation leader among Dutch banks, conceding it to ING, which now has the best reputation of all Dutch banks and insurance firms. The reputational erosion of Rabobank is not only reflected in a lower general score for reputation; it can also be seen in a lower appreciation of the drivers of reputation. In 2013, Rabobank was present in five of the seven Top 5 lists of the drivers of reputation. A year later Rabobank was present in only three of them and the bank has disappeared from all Top 5 listings this year.

Remarkably, Philips’ did not have an entirely smooth reputational ride in 2014. But despite recent negative publicity regarding Royal Dutch Philips’ operations in the USA being visible in the data collected by the Reputation Institute and RSM, the 103-year old company kept its crown. Decreases were seen in Philips’ performance in the seven drivers of reputation: products and services, innovation, workplace, governance, citizenship, leadership and performance.

Frans van Houten, CEO of Royal Philips Electronics, said: "Once again, I am very proud that Philips achieved the top position in the Reputation Institute’s ranking. Receiving this prestigious award for the eighth consecutive year is a testimony to our brand and recognition that our mission to improve the lives of billions of people through meaningful innovation is having an impact. For over a century, Philips’ strong reputation has been a true source of motivation for employees, inspiring us to deliver innovations aimed at making the world healthier and more sustainable. That is why I believe Philips will continue to inspire the world’s future innovators."

According to RSM’s Professor Cees van Riel: "A good performance is a prerequisite for a good reputation. Improving a reputation only succeeds when the firm offers products and services that are seen as relevant – not only by customers, but also by governments, neighbours and employees. The clarity with which Philips explains the added value of its LED lighting or its medical equipment is the reason for its high reputation score over the years."