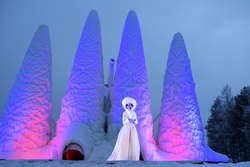 The builders of the Sagrada Familia in Ice received a a warm welcome at TU/e yesterday afternoon. They were welcomed by their dean and the Executive Board. The team gave a presentation of their project.

The basilica, made of ice by Built Environment students in the Finnish town of Juuka over the past month, was officially opened last Saturday. Opera singer Laurien Schreuder performed as an ‘ice angel’ and the building was dedicated by bishops of the Finnish orthodox and Lutheran churches.

Even during the opening ceremony, Teun Verberne and Jordy Kern – two graduate students who supervised the project with their supervisor Arno Pronk – were still in a man lift to cut the rope structure from the opening of the highest tower in the dome. It was supposed to be thirty meters high, but it was never finished. However, the smaller towers, both 21 meters, were good for a new record.

On Saturday morning at 4 a.m. local time the team had stopped adding water-and-sawdust mixture (pykrete) onto the framework representing the famous church by Gaudí. The balloon that served as a mold for the dome was removed right after that.

The opening ceremony was attended by 1,400 paying attendants, says Pronk. "Many more than I had expected. I believe tickets were ten euros." From now on, a ticket to see the Sagrada are five euros, and that includes access to a small igloo and ice rink, and a sledding course for children. On Sunday, the day after the opening, approximately 600 people visited the site.

The construction is expected to remain until the end of March. Pronk, Kern and Verberne might return before that to measure the construction once more and possibly finish the highest tower with the assistance of Finnish volunteers.