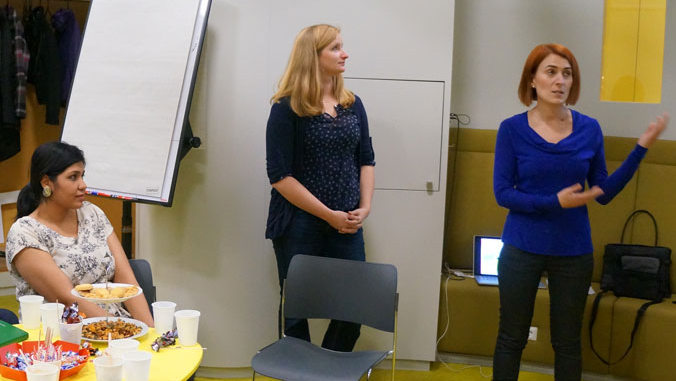 Recently a new initiative to help international spouses in Eindhoven and region to a fulfilling career saw the light.

Three young women professionals Anne Theiss, Kavitha Varathan and Ioana Iliescu started the Expat Spouses Initiative because they realised there are many highly skilled international spouses, who have difficulty finding a job in their new home country. Although they think spouses who will benefit from the initiative are mostly women, men accompanying their partners to Eindhoven are also supported.

As International partners themselves, they are seeking to address a problem they have experienced first-hand. They envision the Expat Spouses Initiative (ESI) as a non-profit organization that will actively find solutions to the problem. It’s a platform that represents international spouses and will assist, coach, and guide them towards professional activation.

Their solution has three core channels: Help spouses to get employment, help spouses who want to start a business themselves (the entrepreneur channel), and the creative collaboration channel.

The last channel is the most innovative channel and mainly represented by Kavitha, who moved to Netherlands six years back from India and has a Masters in Architecture from TU Eindhoven. As a professional designer who believes in the co-design approach, she explains: "we feel that ideas born out of co-creation in multi-disciplinary teams are interesting for companies and it is a new way of approaching the labour market. We want to get people with different skill sets to collaborate according to the requirements of a company or create innovative solutions that maybe interesting to the industry. The future projects can be tested at our own spouse initiative base, which will act as an incubator space for these cross-disciplinary ventures."

The organization will achieve their goals through deployment of own skills, networking with stakeholders and other associated partners and identifying the skills and expertise in the professional international community. The three main support services that the organization wants to continuously offer and will help spouses in their career are: networking, coaching and consulting & support.

Solutions which are needed apparently. Ioana, who is interested in networking with stakeholders and other associated partners, came nine years ago as an exchange student from Romania, and has a Professional Doctorate in Design Management Systems. She states: "one in 12 internationals in Eindhoven is a highly skilled economically inactive individual. Tapping into their skills and expertise will not only help the international spouses and their families but will also help Eindhoven’s local economy. We should try to do something about it."

As a demonstration of existing untapped human resources in the community, in a recent networking event of ESI, visitors like Anastasia, who has a diverse skill-set with PhD in Urban Sciences and Systems and Master’s degree in Architecture find it difficult to professionally integrate. Mamatha from India agreed: "I have a Masters in Business Administration, I am six years in the Netherlands, did my ‘Inburgeringsexamen’ and now it is high time I find a job." Also, another participant, Manasa from India with a Bachelor in Engineering & Electronics, a Masters in Business Administration can relate to the problem. She has a two year gap since she left University.

As the main reasons for the unemployment there are two significant causes: One is the language barrier and two the gap in C.V.’s. Personal situations like moving, settling, having children puts a gap in these women’s professional career.

Anne, the German initiator, lives in the Netherlands for nearly six years and has a Masters in Industrial Design. One and a half years ago, she started a Communication & Branding Agency in the Netherlands, BluePea, with her business partner Daniel Geal. She wants to support the long term project with her entrepreneurial and professional skills in communication and branding. "Up to registering yourself at the ‘Kamer van Koophandel’ (Chamber of Commerce) it is easy, but after that things get challenging. Understanding tax rules, legal regulations and other official procedures, is very difficult if you don’t speak Dutch and to make an entrepreneurial idea a success you need more than just an understanding of the regulations."

Eindhoven wants to establish itself as one of the leading technology, design and start-up destinations in the world. Developing the region as an international destination for professionals, needs investment from both sides. On one hand the potential work force needs to reflect on how to get employment and overcome challenges and on the other hand the governmental bodies and commercial organisations need to look critically into how welcoming and accessible they are and how understandable and available their information is for internationals.

The plan of the initiative to empower women and men is to start profiling the community first for which Kavitha was awarded the Marina van Damme Grant (9000 Euros) last week. In April 2015 they want to start the ESI officially, and shortly after that, also in 2015, they are kicking off with the three (entrepreneurs, creative collaboration and employment) programs. By December 2016 they hope that through this scheme 100 spouses are professionally active again.

If you are an international spouse in the Eindhoven region, looking for assistance with professional reactivation, you can contact the team of Expat Spouses Initiative, ESI on their Facebook or Linked-in platforms.