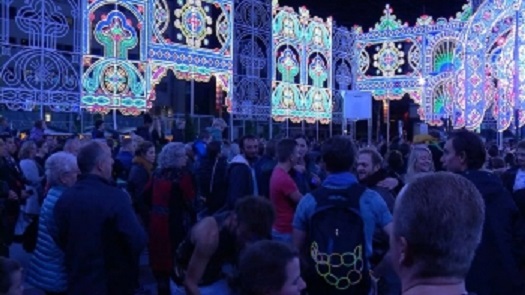 Light has been central to human existence from time immemorial. Every culture, every scripture and every race to have ever inhabited the surface of Earth has a mention of light or one of its various interpretations. Having baffled scholars and scientists equally over the centuries, light and the possibilities associated with it continue to mystify and bring joy to humankind. GLOW is one such addition, an event that both mystifies and marvels its audience.

The theme ‘City in Motion’ offers many possibilities I thought, it surely was exciting enough to get me all enthusiastic about what GLOW 2014 had in store. My GLOW journey started from the installation ‘State Machine’ right opposite the entrance of the GLOW café. It was a bold visual expression to say the least. With the entire side structure of the DELA head office as his canvas, the artist Michel Suk has realised his take on the theme beautifully. One could see the amount of expertise gone into creating a sort of a trapeze act with lights and the effort gone into integrating the whole act with sound that fits perfectly well.

The next installation along the route was much softer but pleasing nevertheless. It was an installation put together with artwork done by children. Lots of pleasing colours and happy vibes to take me back into a relaxed mode. What followed this was truly amazing and a definite recommendation to say the least. The Augustijnenkerk has two different sets of installations ‘Stereo’ by The Macula and ‘Transcedent Flow’ by Casa Magica.

While Stereo uses the exterior facade of the Church, the Transcedent Flow transforms the interiors of the church into a magical experience. Stereo highlights different elements that are a part of the asymmetrical architecture of the church while adding newer elements through projection. The creators have tried to capture the feelings one would go through if they were to open a magic sound box. Transcendent Flow is a fifteen minute paid presentation where one can see how light can manage to transform the entire ambiance of a location. Giving the audience the feeling of being within a kaleidoscope and convincing you that the walls are actually communicating with you in their own special way.

Together both these installations have made me see the church in a totally new light. Kudos to both the teams who have made this possible.

Moving on, the next installation actually educated me that Eindhoven is referred to as the light city not mainly because of Philips but because of all the matchstick factories that used to be operating in Eindhoven. The close up of the burning head of the matchstick was also very impressive. The next installation was one representing the concept of waves. Representing the tides of the sea, the installation tries to capture both animate and inanimate properties of motion.

The Spoorzone (literally translated as train tracks zone), which through its natural association with the concept of motion has been included in the GLOW walking route this year, has thought-provoking installations as well. The pendulum, which I was told was also present last year at GLOW, drew my attention the most. The basic concept of physics guide the installation and a top view of this captured on camera and projected adds a new dimension. The installation ‘Figures that Wander’ manages to capture human interaction with light and effects created therefrom.
With a team of six dancers who dance nude, the four windows will be busy with nonstop dancing for more than 5 hours every single night at GLOW. Further towards the station was an installation that depicts the greenhouse effect in a very different manner.

Coming to the four installations I found best. Two of the four connected to me in terms of the concept, though not very inclusive, they still managed to capture my complete attention. These were the ‘(M)ondes’ by the French designer duo Astra, along Villa De Laak which explored the interactions between reflected and non reflected light and exchange between a static surrounding and moving imagery. A little further down was the installation ‘Guardian Angels’ by another French designer duo Maro Avrabou and Dimitri Xenakis, which were water jugs with water flowing from them to illustrate human involvement in being part of the solution to environmental crisis.

The remaining two installations got me involved quite a bit. Firstly an installation called ‘City Loops’ at the parking lot in the Raiffeisenstraat and secondly an installation called ‘Merellaan GLOW’ at the Merellaan. City loops was created by Story Box from New Zealand. The team captured images of people and places in Eindhoven for the last few days and project it on screens installed on containers. What made it even better was that the public could also send in photos through Instagram and be part of the project. The installation Merellaan GLOWS by Iris Dijkstra from Atelier LEK brought back an entire neighbourhood to life with her installation. The artist connected with the residents of the Merellaan to unearth the history of the houses there. A history lost on record due to a fire in the records section at the municipality some time back. Trees are illuminated to add character to the houses and lit icons on the exterior of the house share the history of that particular house with the audience.

The dropping temperature made me stop my exploration on the GLOW route and made me reschedule it for some time later in the week. But the installations I have already seen are inspiration enough to go back and complete the route and plan my trip to the GLOW next on Strijp-S!