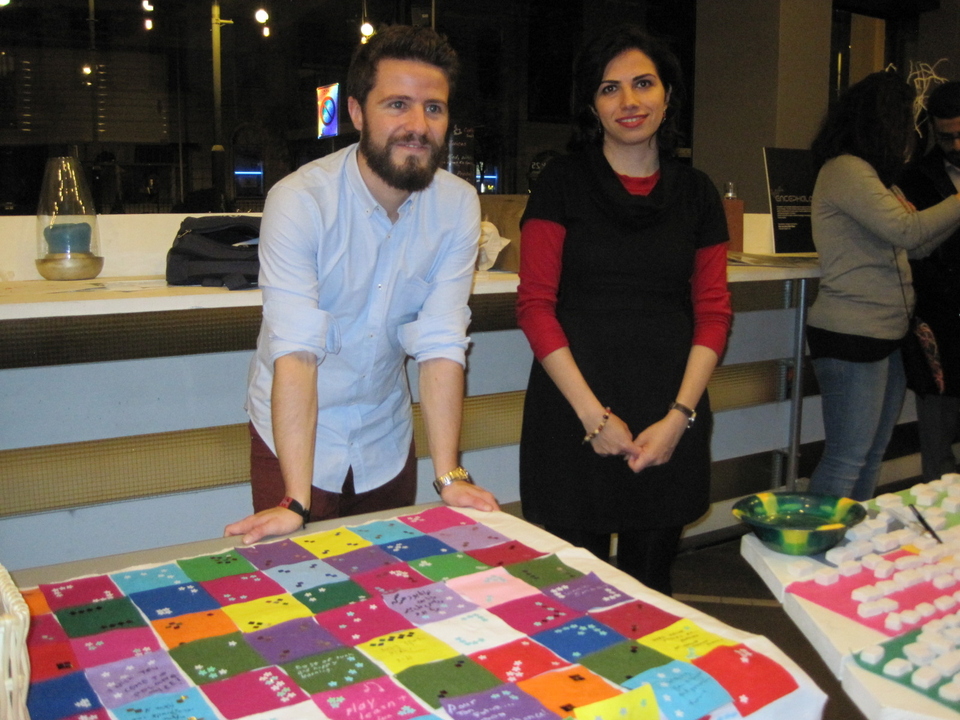 Yesterday, at the Hub Eindhoven for Expats, the fundraising event for a school in Mali took place. They closed off the day with an extra 3000 Euros for the good cause.

The event was organised by Mahnaz (from Iran), Luca (from Italy), Lambert (from the Netherlands) and Saeed, Afrooz & Elham (from Iran). They have known each other for years, from the time they spent at the TU/e.

Mahnaz Shokrpour is explaining how this event materialized: "In Iran, I had a good experience working for a charity. I was helping sick children by teaching them and playing with them; it was very fulfilling and I wanted to do something similar in The Netherlands. I know Luca and he knew the charity organisation ‘Stichting Djenne’ from the Dutch Design Week 2013. Together with the others we worked hard to make this event happen."

Luca Paroni is adding: "We thought a cultural event would be very nice, the variety of people we find here marks the Eindhoven region. We invited people from different countries to showcase their heritage."

The diversity in performances was universal indeed. There was a Greek dance, a Mexican Mariachi band, a didgeridoo player, an Indonesian angklung ensemble, a Malian musician and not to forget: a Dutch folk singer.

The Indonesian angklung music was praised by visitor Angeliki from Greece: "The performance was really beautiful. The sounds were wonderful. They played Western songs, Christmas songs and Indonesian songs. I loved it."

Another performer was Karel Franken, from Brabant, with folk music. He used all kinds of instruments to play local songs, instrumental as well as accompanied with his singing in dialect.

To boost the sales there was delicious international food, such as Japanese Oden, which can be described as vegetables served on a stick, boiled standing up in a large pan of soup, German Christmas cookies, apple pie and Dutch pea soup.

Other stalls had fundraisers such as ‘Adopt-a-brick’ and ‘Buy-a-wish’. At the first one, you could buy a clay brick for 3 Euros. You could pick your lucky number as the bricks were engraved with numbers from one to 300.

Stichting Djenne was present as well of course. They informed the public about the beneficiary cause and sold Mali products like bracelets, necklaces and other native charms and ornaments.

Besides classrooms, the school in Mali also has a workshop where students can learn crafts and a living area for homeless children, where a total of 300 children can be accommodated.

As Luca finishes: "We think that children all over the world deserve to have a decent life where playing, learning, smiling should be an everyday must. Therefore, this event won’t be the first, nor the last that we organise."

Here you can have a look at the school in Djenne, Mali.