Home NEWS All eyes on Stella in USA 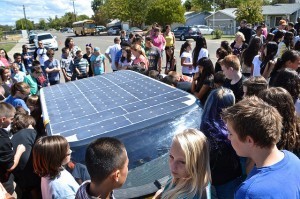 One event included taking part in a world record attempt for most full-electric cars in Cupertino, California.

According to TU/e Solar Team Eindhoven the best USA experience was their visit to Rio Linda Preparatory Academy in Sacramento. (Former) team manager Lex Hoefsloot says:
"We were treated like heroes at the Sacramento school", Hoefsloot says. "Those kids had been preparing for our arrival for two months, and had learned a lot about our car already. This girl stretched out her arm as far as she could, only to exclaim "I touched Stella!" moments later. We were even giving out autographs."

The Solar Team visited several events, including the annual ITS conference for smart transport systems in Detroit, and spent a week at NDEW in California.