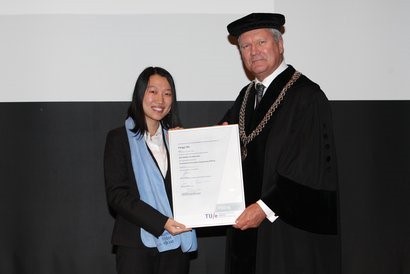 Chinese Fangyi Shi from the Designer’s programme Software Technology was officially honoured on Wednesday 1 October by Rector Magnificus Hans van Duijn. Shi is the 3,500th recipient of the Professional Doctorate in Engineering (PDEng) degree at one of the three universities of technology in the Netherlands since its introduction in 1986.

Van Duijn pointed out that the programme has accounted for a € 350 million investment in innovation over a 30-year period.

Shi (27) gained her Bachelor’s at Beijing University of Technology and her Master’s at the Technical University of Denmark. The assignment that she completed last year at TNO-ESI as part of the Technological Designer’s program Software Technology was entitled ‘Coherent Tool Support for Design Space Exploration’.

Eindhoven University of Technology (TU/e) has now successfully educated more than 2,300 PDEng graduates in the employment market in the Netherlands. A striking fact is that more than 80% of the participants are from other countries. The programme has proved to be a near-guarantee of employment, as almost 90% of the PDEng graduates find permanent jobs in the Netherlands. Many of them are offered positions by the companies in which they carry out their assignments, and more than half stay in the Brainport region. Another striking fact is that, in contrast with other forms of higher technical education, almost half the participants are women.