Home NEWS Call Out for your cassette players at Effenaar 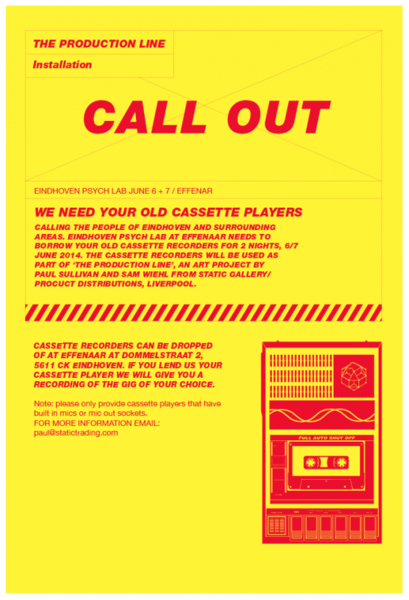 ‘The Production Line’ at Eindhoven Psych Lab at the Effenaar needs to borrow your old cassette players as part of an art installation on 6 and 7 June.

‘The Production Line’ offers the audience the opportunity to buy a cassette recording of the band they have just seen on stage.

The cassette tapes are then packaged on an assembly line and sold once after each performance. If the cassettes are not sold they will be returned to the recording area in time for the next band and used again.

By providing only one opportunity to buy the ‘live experience’, the project explores the relative celebrity or standing of each band. In an age where almost all performed music can be downloaded freely on the internet, ‘The Production Line’ instigates a temporal economy that offers a unique analogue sound memento of the event to an audience that is willing to buy and extend their actual experience of the Psych Lab infinitum.

The use of the analogue cassette recorder and tape in Eindhoven also references not just the invention by Philips in 1962 of the ‘compact cassette’ but also their decision to license the format free of charge – in the face of pressure from SONY – a decision that lead to the domination of the market by Philips. In this act of free license – giving the public the ability to record and edit their own music – it could be argued that this was the precursor to free sampling, appropriation, digital download and editing.

DROP OFF YOUR CASSETTE PLAYERS/RECORDERS at Effenaar on 5 June. In return you will receive a recording of your choice. They only need cassette players with built in mics or mic out sockets.