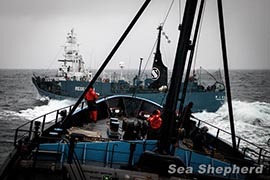 The Japanese government asked clarification from the Dutch authorities about the collision between the animals rights activist from Veldhoven, Erwin Vermeulen, and Japanese Whalers.

Erwin is sailing on the Bob Barker, which belongs to the Sea Shepherd and sails under a Dutch flag. On Sunday, the Bob Barker collided with Japanese whalers south of New Zealand.

According to the Japanese, the Sea Shepherd was guilty of "extremely dangerous sabotage activities". They defined the action as unjustified. The Bob Barker collided with the Japanese harpoon vessel deliberately, says Tokyo.

Captain Peter Hammarstedt of the Bob Barker contests the Japanese version. According to him, The Sea Shepherd vessels were attacked by Japanese vessels with no apparent reason.

According to other sources, none of the vessels endured serious damage and no one was injured.
The Dutch Foreign Office stated that the transport authorities are going to further investigate this collision. They are going to check if events were handled according to maritime rules.