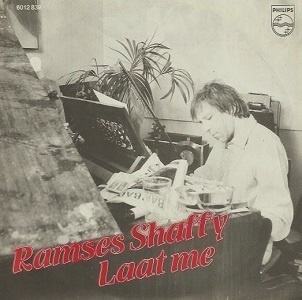 Ramses Shaffy is one of the most famous Dutch singers of the sixties and seventies.

At the moment he’s the subject of a successful mini-series on public television. The last episode will be broadcasted this Saturday, so you may be a bit late, but you probably can catch up via the internet or buy the dvd series (you’ll have to understand Dutch though, which might be a small problem for all you non-Dutch speakers).

Ramses Shaffy has sung several famous songs, and everybody has their own personal favourite. Perhaps your favourite song might be ‘Zing, Vecht, Huil, Bid, Lach, Werk en Bewonder’, a new age-like song with a title that translates as ‘sing, fight, cry, pray, laugh, work and admire,’ or it could be ‘Pastorale’, a more or less psychedelic duet with the female singer Liesbeth List, a close friend of his (by the way, ‘Pastorale’ was written by one of the best Dutch songwriters ever, called Lennaert Nijgh).

In this column I chose the song ‘Laat Me’ because it is a personal favourite but also, more importantly, it is written by local songsmith Herman Pieter de Boer, who died in the early hours of January the first 2014, earning the improbable honour of being the first famous person to die in the new year. He was a successful songwriter, having written Dutch evergreens such as ‘Ik Heb zo Waanzinnig Gedroomd’ and ‘Op een Onbewoond Eiland’ (both written for the children’s choir ‘Kinderen Voor Kinderen’, famous for their yearly Sinterklaas/Christmas CD’s and even more famous (or better: infamous) for their annoying accent (called ‘the rolling rrrrrr’)). Herman Pieter de Boer wrote lyrics for singers like Lenny Kuhr (another local hero) and Hans de Booij as well.

Shaffy, born in Paris to an Egyptian consul and a Polish countess, grew up in the care of foster parents in the Dutch city of Leiden from the age seven. From the sixties onwards he had a career as singer and actor, but he is also famous as a bon-vivant, a man known for his drinking habit and his staying up till the early hours of the morning. That he lived to the quite ripe age of 76 years old, dying in 2009, could easily be seen as a miracle. The last twenty years of his life he made several public appearances whilst suffering from Korsakoff’s syndrome, a result from his heavy drinking habits.

‘Laat Me’ could be a fitting motto for Shaffy. The lyrics ‘laat me, laat me m’n eigen gang maar gaan,’ can be translated as ‘let me, let me live my life.’ With his rough life he was considered anti-bourgeoisie in the sixties, so the lyrics by De Boer were well chosen.