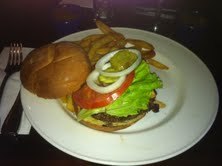 In my quest to find the perfect all American meal, burger and fries, I’ve run into a bit of a speed bump. The hamburgers here … I’ll let you add in your own adjective to describe what they serve here in The Netherlands as a burger. To me it’s unthinkable that a country that has the French fry perfected down to a culinary art can go so wrong in the meat department. I mean, making a hamburger is really cooking 101, isn’t it? Take ground beef, smash it together into a ball, flatten it, and throw it on the grill and voilá!

[nbsp] Well, that’s not quite how it turns out. For some reason the hamburgers here all taste like mom’s leftover meatloaf on a bun. Not sure what’s added but it’s like a cake burger. I even went to one place describing their hamburgers as The All American Cheese Burger. They had many burgers named after cities. There was the Chicago Burger, The New Yorker, the Philadelphia… and so on. I think there were at least 15 different kinds. I thought, finally, I had found the hidden place with all the good burgers. No, nope, nothing, nada! I took one bite and stopped. Today I read an article that the first test tube hamburger would be produced at Maastricht University, a Dutch University. Why am I envisioning the movie How to Lose a Guy in 10 days? Remember the part when Kate Hudson Photoshops the pictures of her and Matthew McConaughey together to show what their kids would look like? It’s funny how sometimes, two rights just make a wrong. I’m thinking test tube and beef… NO. Now don’t get me wrong, I understand I’m not in America. But the neighboring countries here seem to not have a problem making hamburgers. But it’s ok… I’ll keep choosing my tomato soup and goat cheese salad. That is of course unless I travel to Amsterdam; then it’s Hard Rock. And Yes, they know how to make a hamburger! Lisa Jochim