Women for Women is a program that matches international women who seek to start their careers in the Brainport region with influential female ambassadors.

The Women for Women program is an endeavour initiated between Expat Spouses Initiative, ESI (an organization devoted to jumpstarting the careers of expat spouses) LivingIn Program (the municipality’s expat program which supports improvement of the living conditions of internationals) and Eindhoven Gemeente. The aim of the Women for Women program is to mobilize the workforce of highly qualified international spouses and implement the dual career system in the Brainport region.

The program introduces sixteen highly skilled international Talents to sixteen locally connected Ambassadors, serving as a springboard for jumpstarting both careers that are just blooming and being restarted alike. During the program, the daunting task of finding a job in a new country is broken down into manageable steps. This way Talents are enabled to take ownership over each aspect of the job hunt, empowering them to tell their stories and present themselves to future employers. 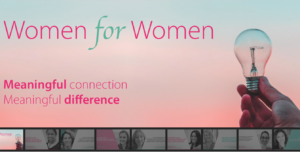 Over the last three months, the Talents have systematically tackled each step of the job search process, building momentum. They started with pitching themselves and their visions and moving on to more conceptual topics like networking and posing thought-provoking career questions to contacts in their respective networks.

The ecosystem concept employed in the program can be seen in many aspects of Dutch society and a mastery of this skill is a strong indication of professional assimilation. To accomplish assembling such an ecosystem, the partnership has been busy recruiting corporate identities, government institutions, community ambassadors and locally based international talent, which has proven paramount to the success of the program. Spinning a web-like network, the goal of the initiative is to demonstrate to internationals that Eindhoven is a welcoming city with internationally-oriented companies committed to their well-being and retention. Moreover, the program is showcasing the incredible untapped talent that is no further than Eindhoven’s own backyard. By leveraging the corporate network of Ambassadors involved in Women for Women, ESI is working to increase the retention of internationals and decrease the unemployment rate among expat spouses.

The first edition of the program has seen ninety percent of its participants return to the workforce. Now, in the thick of the second edition, the final results of this round remain to be seen. However, there are already several success stories and material
gains in the community, proving the value and fruitfulness of the program model.

With momentum peaking, participants in Women for Women are expected to see the results of the rippling butterfly effect come to fruition in the near future. At the Closing Event of the Women for Women program on 13 March 2019, more insight will be given to this project.

The Women for Women program will continue to voyage forth in a grassroots effort to mobilize the local international talent in Eindhoven and support the dual career household. “With the robust support Brainport Regio, the Holland Expat Center South, the tireless efforts of LivingIn and Expat Spouses Initiative, the second edition of Women for Women is drawing close to its end and brings the region one step closer to achieving unadulterated internationalisation. Stronger Together is not just an adage but a mentality
that conveys that ‘a gain for one of us is a gain for all of us”

Open-heart surgery for cardiac arrhythmias can now be done faster and...