Home FEATURES What do learning Dutch and Gaelic football have in common? 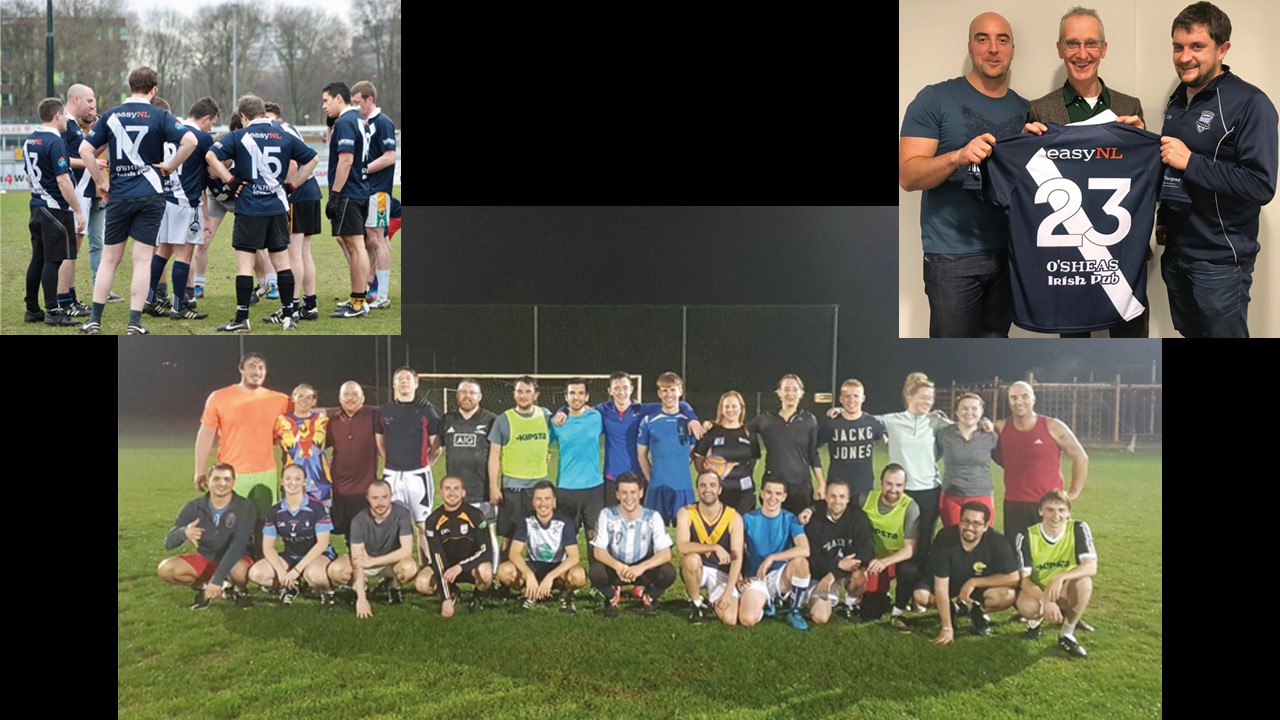 Nothing really but this is how learning one thing can help the other.

Through a couple of Irish students, Frans Suijkerbuijk from language school easyNL got to know about the Eindhoven Shamrocks, a Gaelic football club. Now he is sponsoring their t-shirts. This is how the ball got rolling.

“The Brainport Region houses a large community of highly educated migrants and international knowledge workers,” says Frans. “That is not surprising when you consider what is happening here in the areas of innovation, technology and development. Each year, hundreds of foreign PhD students, students and knowledge workers are attracted to settle here for a long(er) time. They often find out that learning the Dutch language is a key factor in building a new life. easyNL tries to introduce this group of migrants to the Dutch language and culture in a fast and good way. We pay attention to the personal, work, study and life situations of the students, but also to the social aspect. For example, we organize as many courses in group form as possible to promote contact between students and we regularly organize social activities, for example an excursion to a Dutch city or attending a cultural event. We see new friendships and nice contacts between students with the same background, but also internationally. And that is a nice development that certainly contributes to a continuous or prolonged stay of these people in Brainport Eindhoven.”

A nice example in this respect is the sponsorship by easyNL of the Eindhoven Shamrocks GAA Club, also known as the Gaelic football club of Eindhoven. This Irish sport was introduced in Eindhoven some five years ago. “I met the Eindhoven Shamrocks a few years ago through Ciarán O’Reilly and Ben McEntee, some of my then Irish students,” says Frans. “They joined easyNL through Xelvin, a secondment in the tech sector that attracts many international knowledge workers, including from Ireland. Ciarán and Ben told me about their national sport Gaelic football and, that together with a number of other Irish people and with the cooperation of Xelvin they had founded a club in Eindhoven: the Eindhoven Shamrocks. EasyNL, as a shirt sponsor, wanted to contribute to that. On the one hand purely out of sympathy for everything to do with Ireland (I have a weakness for that country and people) and partly because of its positive social importance. ”

The Eindhoven Shamrocks now have about thirty-five members and every Wednesday night the members come together to train. In addition, they regularly play matches against the other four clubs in the Netherlands, three clubs from Belgium and a club from Luxembourg. “Although Gaelic football is an amateur sport, the matches are taken very seriously,” says Ciarán. “For example, we are very competitive in tournaments and we are staunchly fighting for the title of the European championship that is organized every year in Maastricht. But Gaelic football is at the same time a very social sport and is extremely cool and relaxed at the Shamrocks. After the match we like to have a beer with each other and with the members of the opponents.” “And although Gaelic football is a typical Irish sport, our club consists of people from all cultures,” adds team member Aren Sonne. “For example, I come from America myself and I got to know the club through Ciarán, because we both work at ASML. But also Dutch people are of course very welcome. We think it’s important to let people, with whatever background, share in the fun and feel at home with our club. Social contacts, wanting to keep an independent association afloat, these are our main goals. We are very grateful for the sponsorship by parties such as easyNL and our other sponors that make this possible and proud of the fact that we have now grown into the third largest expat club in Eindhoven.”

Are you curious about Gaelic football? Please contact the organization by sending an email to secretary.eindhoven.europe@gaa.ie. There is also a Holland Ladies Team for interested sporty ladies in the Netherlands. Or visit their Facebook page.

Are you curious about what easyNL can mean for you or your international employees? Have a look at their website www.easyNL.nl. 2 December 2022
TU/e, Fontys Hogescholen and also the business community should do more together with the municipality to tackle the housing shortage among students. This is...