As a historian, I was interested to visit the exhibition,  “Van Markt tot Metropool”, in the Erfgoedhuis (Heritage House) at Gasfabriek 4 in Eindhoven.

The first thing that catches your eye when you look at the oldest city maps of Eindhoven is that the basic layout has not change much at all during the centuries. The roads still basically follow the same route; and where the city wall and the accompanying moat used to be there are now roads whose names are reminders of their past. But though very interesting, this is not unexpected, as the same could probably be said about most European cities. 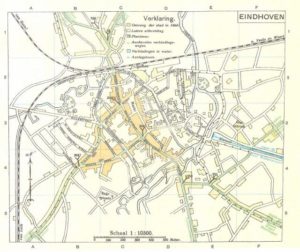 The same cannot be said about the plans hatched by the city council in the 20th century. Here the planners really went to town, excuse the pun. If they had had their way, the city centre would have been one big slab of concrete. Maybe they had visions of Brasilia. But what they sadly missed was an architect like Oscar Niemeyer. But maybe the architects responsible will disagree with me here. Anyhow, luckily the plans never came to fruition. 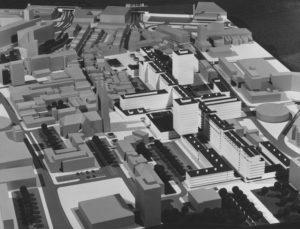 This exhibition has been arranged by the non-profit foundation Eindhoven in Beeld. This foundation was set up to record the history of Eindhoven by means of all kinds of visual media about Eindhoven, like maps, drawings, pictures and film. I met up with their board member and Public Relations Officer, Hans Holman, who told me a little about their voluntary work and showed me around.

The subject of the exhibition is the growth of Eindhoven from a small city to the bustling metropole it is today. One of the recurring themes is that Eindhoven, at different times, grew out of it boundaries and needed the surrounding villages to accommodate this growth. In 1920 this led to the incorporation of five independent villages we today know as five boroughs of Eindhoven – Woensel, Strijp, Stratum, Gestel and Tongelre. Like today, these villages saw a sharp increase of their number of inhabitants. And, also like nowadays, many of the original inhabitants were not too happy about being taken over by the city.

The exhibition is, though small, very interesting. It is insightful and it makes you wonder and smile at places. One can only hope one day Eindhoven will have a larger and permanent museum to commemorate its past. That would be a fitting tribute to both the city and its people as to the volunteers who continue their work to preserve the past.

You can visit the exhibit daily during weekdays from 11:00 to 19:00 until August at 4 Gasfabriek, Eindhoven. Peter Trommar will give a lecture on the same subject as the exhibition on Sunday 21 May at 13:00 at the Erfgoedhuis.