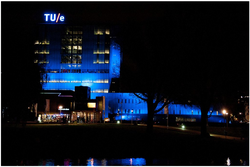 This year during GLOW, TU/e is keen to set a world record with a thunderbolt measuring at least 80 meters long. This is just one of the university’s projects planned for display on the campus starting November 12, 2016.

Five years ago, the GLOW route went accross TU/e, which contributed a musical Tesla coil from the roof of De Zwarte Doos. The Tesla coil will come back in the lake next to the grand café, casting lightning over the black Buddha and eggs artwork by Alex Vermeulen.

TU/e will report the record attempt to the Guinness World Records organization and hopes to beat New Zealands’ lightning beam of 50 meters with 80 to 100 meters. This will be done by applying 500 kilovolts every 10 minutes on a wire spanned by drones.

At Atlas, above another lake, there will be another metres-high hologram by the Integrated Photonics Instituut, based on a 3D scan of artwork in the Van Abbemuseum. This is planned to be moved to become a permanent fixture in hall of the Atlas building.

The MetaForum market hall is to contain an interactive installation by the Department of Industrial Design and the Intelligent Lighting Institute. Light architect and TU/e alumnus Har Hollands is producing a design for this. Three quarters of the chimney will be taken up by a (permanent) colorful LED installation.

The grass field infront of Flux will also contain an interactive artwork, planned by GLOW organizers themselves.
On De Zaale under the trees between Laplace Square and Gemini, a light structure by the study associations CHEOPS and Lucid will be suspended.

This year will be the eleventh edition of GLOW from 12 until 19 November 2016.