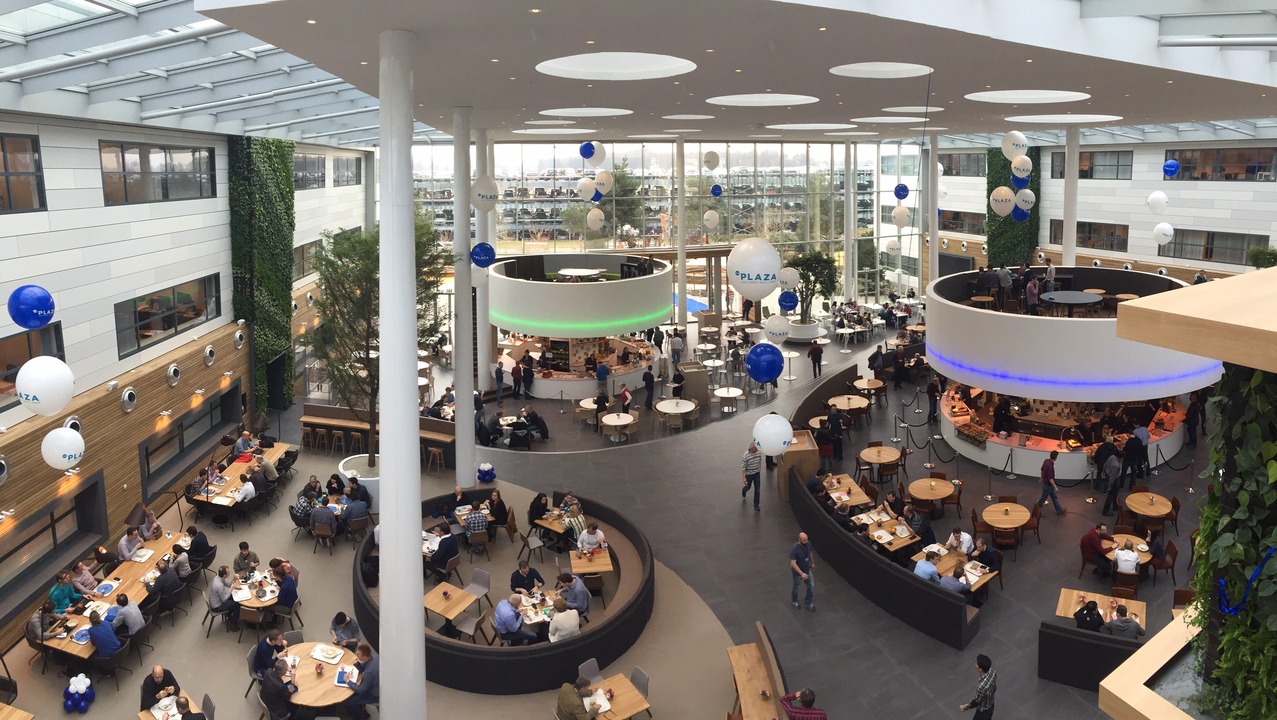 ASML opened their new multifunctional company restaurant two weeks ago, providing not only six different kitchens with each their own sphere, but also comfortable meeting, lounge and flex spaces.

Designed by Van Aken Architecten, everything has been taken into account, from automatic light and temperature control to acoustic damping. With 4000 square meter accommodating 1500 employees, this makes the largest company restaurant in Northern Europe.

Eindhoven News was invited for a tour of the Plaza by Sander Hofman from ASML Corporate Communication. According to him the Plaza reflects the ASML philosophy as a ‘great place to Work, Meet, Learn and Share’. Providing more information about the Plaza was Cecilia Stolt, Senior Manager Internal Communications, and Maartje Aarts, Hospitality Manager.

Ms. Stolt explained that the old restaurant had old fashioned rows of tables and chairs, was too noisy and waiting lines were too long since ASML was growing larger, currently with about 8000 employees at the location in Veldhoven. The kitchen was not diverse enough, with the 85 different nationalities working here. The ambition of ASML, according to Ms. Stolt, is to be a very good employer, and that is not only in the development of people or IT infrastructure, but also providing spaces like the Plaza, for meeting each other, eating and getting a great cup of coffee. She feels that the Plaza will help breaking down the silos, removing the barriers between people.

10 months ago this was just a parking place, and now it’s the central meeting location of the ASML complex. Ms. Aarts explained how the Plaza was designed, making use of focus groups and taking into account the opinion of all employees, including internationals. The employees voted on the name, resulting in ‘Plaza’ as winner. The study also gave rise to six different restaurant concepts: Dutch, Italian, Japanese, Healthy, Lounge and a "Sharing Dishes" idea based on a cookbook published by ASML on their 30th anniversary.
There is also a garden outdoor space for BBQ’s, the Italian kitchen offers freshly made oven baked pizza, the Japanese kitchen offers sushi and you can get your cappuccino at the coffee bar and even order your own birthday cake.

All warm meals cost under 5 euro’s, and it’s possible to get a lunch for only 2,50 euro’s. Employees can also still bring their own home made sandwiches (a Dutch habit). In the weekend a number of the kitchens are open. Unlike the Strip at the High Tech Campus, the Plaza is only accessible to employees of ASML, but with 8000 people this makes the Plaza the new town square of the ASML village.