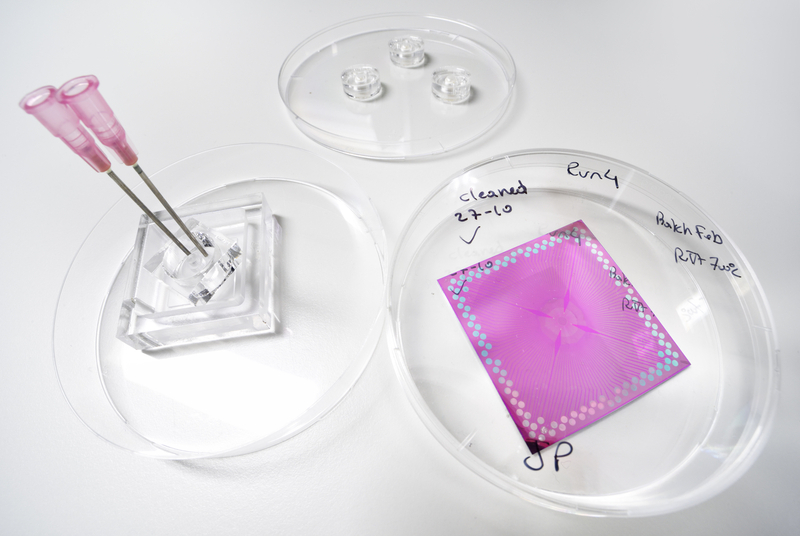 TUe Micro Technologist Regina Luttge is working on special micro bioreactors for brain cells, as platforms for a ‘brain-on-a-chip’. Recently she has been awarded a European Proof of Concept Grant in order to elaborate one of her findings further.

The workings of our brain are still a mystery, to a great extent. Three-dimensional pieces of brain tissue on a chip could make research into brain diseases such as Alzheimer’s, Parkinson’s and epilepsy much simpler. Thinks Regina Luttge.

She designed a microfluidic system: a cylindrical micro bioreactor, with a diameter and height of several millimeters, in which the cells are fed via a microchannel along the circumference of the cylinder. Via a special membrane the channel is connected with a gelatinous substance inside the cylinder – the so-called scaffold -, in which the brain cells can grow. In this way even the innermost cells, located in the center of the cylinder, are still close enough to the nutrition to survive; in a cylinder with a greater diameter you would also need to create micro channels in the scaffold itself.

"The cells in our pits stay alive for more than a week; they retain their natural, three-dimensional shape and develop protuberances by means of which they try to make contact with cells in neighboring pits. By putting electrodes into the pits it becomes possible to measure the electric activity of these ‘healthy’ cells," says Luttge. "Moreover, by sending electric signals to the cells, it becomes possible in principle to disturb the system in a quite controlled manner, and subsequently you can see how the tissue reacts to that."