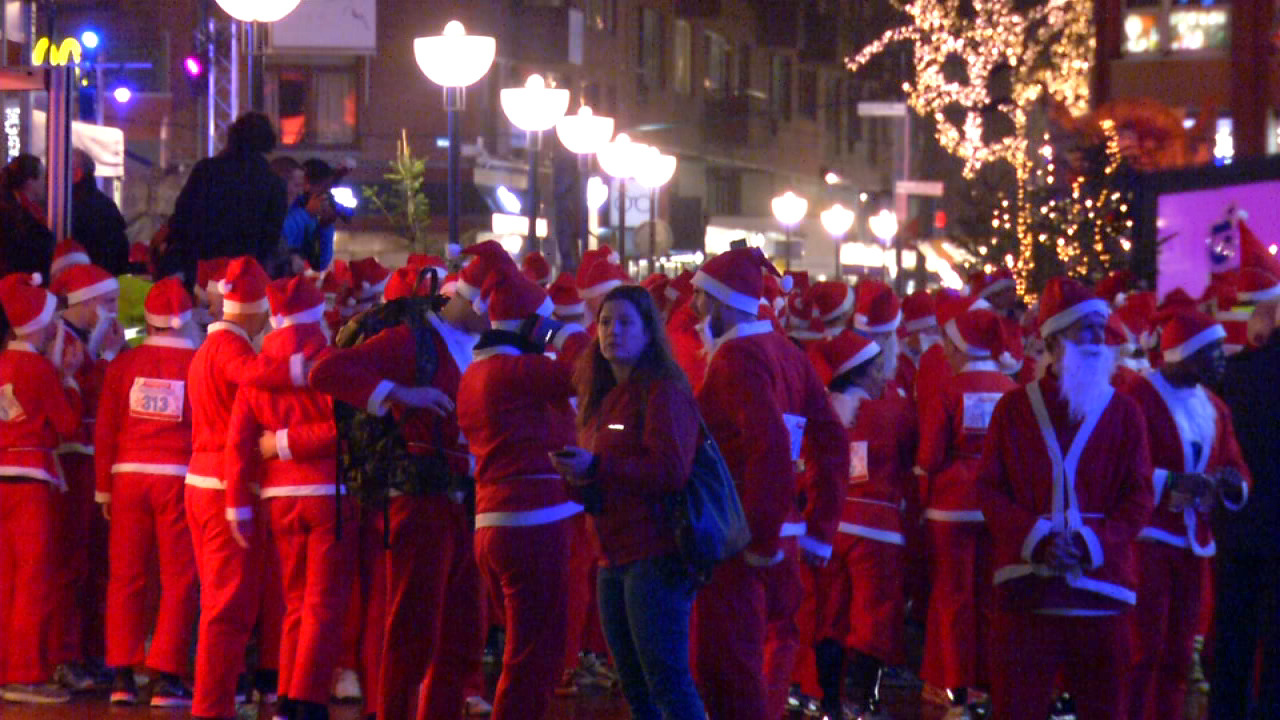 I was lucky enough to be given a free entry to the Santa Run, which took place on Friday 18 December. About 400 other recreational runners also registered and raised €1250 for the Eindhoven Food Bank (Voedselbank), and a large number also generously turned up with food items on the night.

The spirit of Christmas was alive and well!

Fun: I knew it was going to be a fun night as soon as I approached the Smalle Haven. There were balloons. There were lights. There was music. There was fake snow. And there were Santas. Hundreds of them! I picked up my jolly old suit and donated some food items to the Eindhoven Food Bank. 21:30 was nearing and the sea of red and white was growing. And then the best part of the night happened – the warm up! What a hoot. Hats off to "the warm up guy" who got everyone pumped and ready to run. I felt like I’d be transported to some kind of parallel 80s aerobic universe, minus the perms and big hair. Funky music and funny moves. What more could I ask for?

Sweat: And then it was time to do what I had come here to do. Run! With a flurry of fake snow, a flash of light and a countdown to rival the best of them, we were off. Not at a seasoned sprinters pace, but more like a slow crawl through the crowds that had gathered to cheer us on. Makeshift Santa statues and wonderful volunteers were dotted along the route to ensure everyone headed in the right direction. It was my first time to run in costume, and let me tell you, I worked up a sweat! A Santa costume on top of way too many layers certainly made me hot. On my second lap of the 2km route, a volunteer kindly took care of one of those layers for me. I needed a drink!

Beer: You’re ensured a festive crowd while you run through the city centre on a Friday night, dressed up as Santa. Revelers in pubs and bars ho ho ho-ed the runners on, while live music kept everyone entertained. There were some quiet corners around the course, but no one was ever far from someone ready to cheer, offer a beer, or snap a photo. As the runners crossed the finish line, quite a few celebratory cold ones were consumed to cap off this festive fun run! Here’s hoping the Santa Run will be back, better than ever in 2016. It was great night for a good cause.

Lenise is writing articles on Sport and Exercise in Eindhoven for Eindhoven News regularly. Her go to exercise is running, because "I can do it anytime, anywhere, and in any climate, but I am also a fan of bootcamp and Pilates. Sport has always played a huge part in my life and having lived in a number of countries, I think it’s the best way to get to know some locals, get rid of the occasional stress of living abroad and to feel fantastic – physically and mentally!"