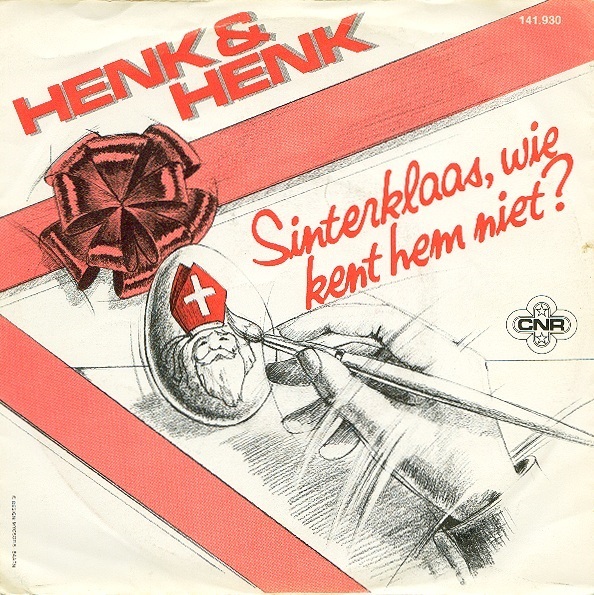 Whereas Christmas has spawned numerous hit singles and standards, you’d be surprised how few Sinterklaas songs have been hits. Actually, you could state there are only two Sinterklaas classics, and they were both written by Henk Westbroek en Henk Temming.

The ‘Henks’ are mostly famous for their Dutch-language band Het Goede Doel (roughly translated as the charity), a very successful act. Back in the eighties they’ve had several huge hits. For reasons unknown they released the vinyl single Sinterklaas Wie Kent Hem Niet (who doesn’t know sinterklaas) in 1982 under the moniker Henk & Henk, scoring a minor radio hit. For years since, the song has been a staple of Dutch radio in the weeks leading to Pakjesavond (presents evening), December the 5th.

Why Sinterklaas Wie Kent Hem Niet is so much fun is the humour in the lyrics. Written by the brilliant singer Westbroek he has put some double entendres in them: ‘het ene jaar drinken ze weer wel, het andere jaar weer niet’ (‘one year they drink and the next year they don’t’), he sings about the visit of Sinterklaas to his home, actually suggesting that Sinterklaas isn’t the same guy every year. Or later in the song, he sings about his visit to Sinterklaas during the summer in Spain: ‘Zwarte Piet die in z’n vrije tijd opvallend bleekjes ziet’ (‘Zwarte Piet looks quite pale when he has a day off’). For a kid the lyrics don’t make that much sense, while parents are smiling at the deeper meaning of those lyrics.

While enjoying great success with their band Het Goede Doel especially, Henk & Henk wrote several songs for other bands and artists (check out the hilariously ridiculous Beethoven they wrote for tv presenter Linda de Mol). In 1986 they wrote the song Ik Ben Toch Zeker Sinterklaas Niet (I’m not Sinterklaas’) for Kinderen Voor Kinderen, the children’s choir of the public broadcaster VARA. They release a new album every year for charity. In this song the dad complains about his four children that have put ridiculous ideas for presents on their wishing list (a diary (with lock), a computer, an apparatus that makes homework automatically) while the kids complain that their dad doesn’t have any money (‘he married our mum, not even a rich woman’).

The both Henks split up at the beginning of the nineties. Singer Westbroek had a successful career as singer, radio-DJ and politician, Temming stayed mainly out of the spotlight, primarily composing and producing new music in his own studio (funnily named StuStuStudio; obviously a pun on the Phil Collins hit of the eighties), though he is a member of the jury of the Dutch version of The X-Factor.

Apparently Het Goede Doel reunited in 2012, but you’ll be forgiven if you missed it. I haven’t noticed their reunion either.