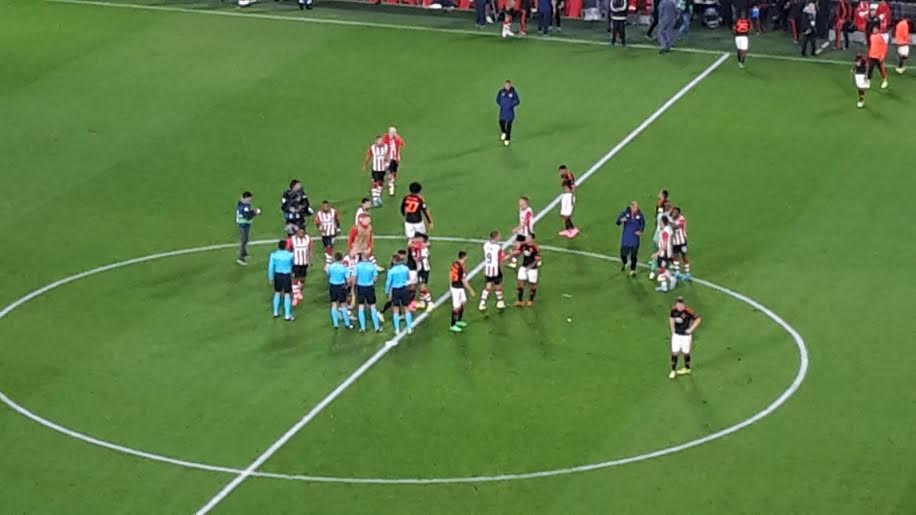 Yesterday night PSV stunted against Manchester United in the first game of the Champions League: it became 2-1 in a boiling and swirling Philips Stadium. The audience stood massively behind PSV and behaved like a true 12th man.

The start of the match was lively and open, with Manchester United dominating possession and getting forward almost at will. PSV did very well to break up Manchester’s attacks, or to funnel them into areas where shots have a lower chance of winding up in the back of the net. It was a smart game plan, and while PSV struggled to get forward during the opening period, it kept Manchester from building too much momentum with an early goal.

After about 20 minutes United-player Shaw gets seriously injured. He is making an attack when he collides with Moreno. Shaw lands very unfortunate and breaks his lower leg.

The competition comes to a halt for some time, while ambulance staff stabilize the player, give him painkillers and carry him from the field carefully.

Yet Manchester United is far from disabled. In the 40th minute it is Memphis Depay (old PSV-player) who scores for his new club: Manchester is on a 0-1 lead. With a -it must be said- superb action, Memphis puts the Eindhoven defence on the wrong track, and scores cold bloodedly.

But PSV is able to recover. In the (due to the injury eight minutes) extra time PSV made the first half end in a draw. From a corner kick, Moreno kicks in the ball with his head. The tying run is on the scoreboard at half-time.

Both teams come steaming out of the dressing room after the break. Manchester United is burned on a lead, but PSV smells opportunity. And it is the Eindhoven team which takes the lead: in a stunning attack Guardado puts the ball ready for Lestienne, who in turn gives a neat cross to Narsingh, who kicks the ball in the nets. The stadium really explodes.

However, PSV can’t rest on their laurels. Manchester United continues to attack, and also gets opportunities. But PSV sustains.
With another twenty minutes to play Guardado is fouled under the challenge of Smalling. The PSV’er wants to continue to play, but this seems impossible. Stijn Schaars is his replacement.

In the last minutes of the game, the tension rises to unbearable heights. The home crowd screams the red-whites towards victory. In the two minutes extra time Narsingh is very close to 3-1, but that didn’t happen.