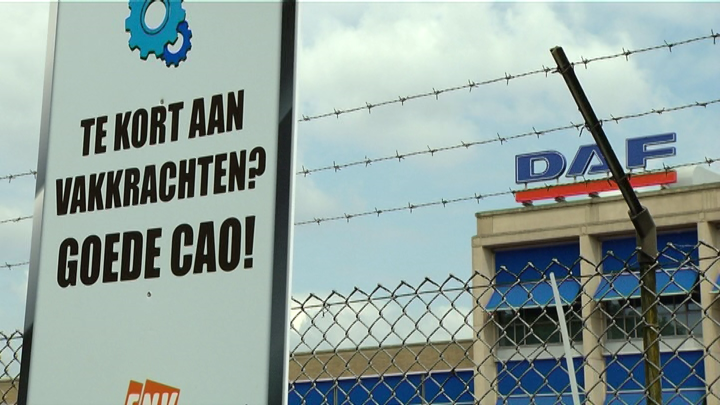 A number of DAF employees starts a three-day strike today. Tomorrow and the day after will also be strike days at the lorry manufacturer’s plant.

The FNV Metaal union is still fighting for an improved collective labour agreement (CAO). The union is demanding ‘fair pay, a good short-time working arrangement (ADV), and more certainty for flex workers’, as it states in the flyer distributed among personnel.

‘The reason this is the right time to organise a strike, is the deadlock between employers and employees’, says Remy de Bats, DAF employee and also member of the FNV executive council. ‘Negotiations have been at a standstill for some time now. It’s an impossible situation. Discussion is all very well, but in the end there must be substance too.’

This is not the first time that DAF workers strike for a better CAO. The last time was at the end of July was eind juli. Work was stopped for 24 hours that time. Now it will be for three days, a first. Not without reason, explains De Bats: ‘DAF is building up reserves. Employees are being asked to work overtime, in order to facilitate these reserves. In order to be able to prepare for a possible strike. If we strike for three days, DAF will have to use up the reserves. Obviously, they have to feel some impact from the strike.’

Little can be said yet about the numbers of employees striking all three days, says Remy de Bats. He estimates between 400 and 900 people.

Although the strikers are stopping work, they will not be idle. They will be going to work tomorrow as volunteers for the Ongehinderd organisation, making, among other, thresholds for Dutch Design Week, with the aim of making the design route more easily accessible.
At the time of going to press, there were already 500 strikers.