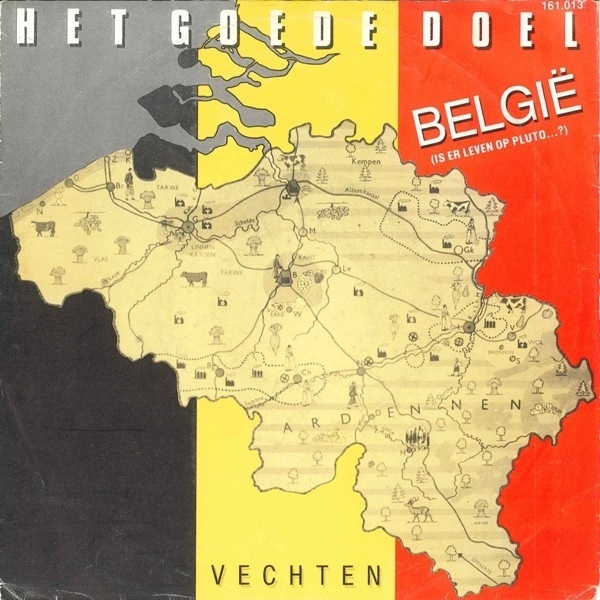 Last week I took part in a television quiz. You might not know, but I’m a bit of a quiz buff. I like to go pubquizzing several nights a week and my television is stuck on the BBC to watch quizzes like Pointless, Eggheads, University Challenge and Only Connect. Unfortunately, I cannot take part in them.

Believe me, I have tried several times, but they only allow people living in Britain, or with a British citizenship. Pity me.
But there is a Dutch version of Pointless. It’s not that much fun as the British one (nobody beats Alexander Armstrong and Richard Osman), but it’ll do. Anyway, one of the questions we (my fellow player Frances, who I know through the pubquizzing) got was to name a country, or part of a country, that’s mentioned in the lyrics of the song ‘België (Is er Leven op Pluto?)’ by Het Goede Doel. And it seems like a good reason to talk about this song in this column. Evidently: if questions on national television are posed about the song, it must be famous.

And yes, it is. Het Goede Doel, which you could translate as The Good Cause, was a band deriving from Utrecht with as main members two guys both named Henk: Henk Westbroek (the singer) and Henk Temming (singer, keyboard). They had their big breakthrough with the aforementioned song and the title translates as ‘Belgium (is there life on Pluto?)’. The lyrics are about the singer, who wants to flee the Netherlands, but doesn’t know where to go to. He sings he cannot go to Germany, because they’re too strict there, and he cannot go to Kuwait, because it’s too hot there. Sometimes his reasoning gets quite bizarre. The protagonist won’t go to Cuba, because it’s too sweet. Well. Yes.

In the end, he works out the country he needs to go to is Belgium, because the Belgians (I suppose he’s talking about the Flemish, to be precise) have such a gentle language. Well, each to his own, they say. You just have to cross the Belgian border by car to notice Belgium isn’t exactly paradise. There’s a very funny anecdote I heard some twenty years ago. An artist told in a Dutch television show that as part of an artwork he sent postcards to everywhere in the world with the request to send it back to him. When the interviewer asked if this went well, he responded he didn’t receive any postcards from warzones and from Belgium, which he regarded as some sort of war zone.

Oh well. Het Goede Doel had several other hits in the eighties, and I think they are among the best Dutch language songs you’ll hear. ‘Alles Geprobeerd’ (tried everything) is about a guy who leaves his girlfriend and tries and tries to find somebody else, but finds out she was the one in the first place. In ‘Zwijgen’ (remain silent) they sing they can talk what they want, but they’d better remain silent and ‘Vriendschap’ (friendship) is a bitter song; that there’s no such thing as friendship.

Maybe the last title was a bit ominous, because Het Goede Doel split by the beginning of the nineties. By then, Henk Temming had his own recording studio (with the funny name Stu-Stu-Studio) and Henk Westbroek tried all sorts of things. He was a radio DJ on 3FM, he started a solo career (and had a huge hit with ‘Zelfs Je Naam Is Mooi’ (even your name is pretty), opened a pub and most famously perhaps, became a politician.

In the end, maybe they found out friendship does exist, because Het Goede Doel are back together and are performing again.

By the way, one of the possible answers to the question we got was Lapland. We did give it as an answer and yes, we did win.