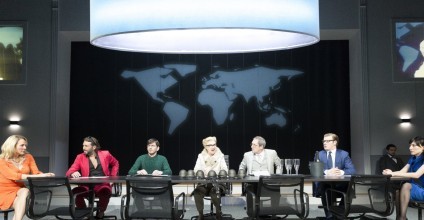 On 28 March, the Dutch play ‘Koningin Lear’ (Queen Lear) will be shown with English surtitles. This is a first for Parktheater and also for Eindhoven.

The audience can follow the Dutch dialogues on the stage and at the same time read the English translation on a panel that is mounted above the stage, (thus the word ‘surtitling’).
The drama, audio and visual effects can be experienced and enjoyed while the international audience can exactly understand what is said as well.

Parktheater likes to be attractive to all Eindhoven citizens, so also to the non-Dutch speakers. Besides offering complete shows in English this alternative can draw a larger audience to more shows. The surtitling is a first for Parktheater and will be used more often in the future if this approach is well received.

In King Lear, the original story, Shakespeare tells the story of an ageing king who must divide his kingdom among his three daughters, thus precipitating his own ruin and that of his country. In Tom Lanoye’s ‘Koningin Lear’ (Queen Lear), the kingdom becomes an international family company managed by the ‘Leading Lady Lear’.

As special offer for this unique event, Parktheater is giving away 50 tickets for €12,50 instead of €27,00 to ‘internationals’. To apply for these tickets for the show of 28 March at 19:30 hrs you need to send a mail to info@indigo-wereld.nl. (First come, first serve).

For more information and regular tickets you can visit the Parktheater website.